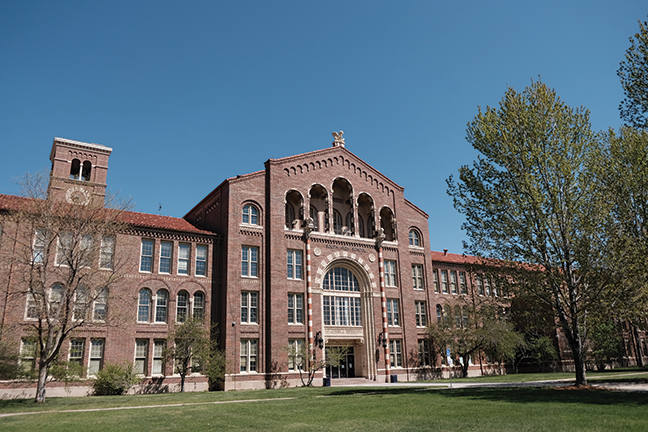 TESTED AND PREPARED: OUR 2020 SENIOR CLASS

Born of terror, now they transition to adults in a time of tragedy. There was a big surge in births nine months after the last time we hunkered down as a nation, and now, almost 19 years later, those 9/11 babies are the COVID Seniors of 2020.

Our little Wash Park neighborhood raised some pretty special kids. They lost their final sports seasons. They lost their senior proms, spring breaks and class trips. They lost that last semester when they could breathe a little sigh of relief, and for the first time, maybe not work quite as hard as they transitioned to whatever is next. They lost, “senior ditch day,” and the sense of accomplishment found in being untouchably close to the finish line. Maybe most sadly, they lost time spent just hanging with friends that have been there their whole lives, and that will now become great memories and occasional check-ins. And now, finally, last week, they lost their graduation ceremonies.

They haven’t complained about what they’ve lost. There have most definitely been tears, but they’ve been shed in private and on each other’s virtual shoulders. Maybe having never taken a single breath when their country was not at war gives them a mature perspective that’s beyond their age. Maybe they know they aren’t sick, and they have their whole productive lives right there in front of them, and the world doesn’t have the strength right now to absorb their pain. Maybe they appreciate that they’ve grown up in a pretty special place, and they’ve already given back as much as they’ve received. Just by experiencing what they already have, and by continuing to move forward, they’re already making a difference.

Annie Welch grew up on the west side of the park. We knew she’d be something special from her early mastery of the ringers on the playground at Steele Elementary, and she hasn’t disappointed. She graduated third in her class at Denver South High School, and will attend Colorado School of Mines in the fall on a full ride scholarship – the first female to attend from a family with seven Mines alumni.

Jade Bronson-Witulski is a fourth generation South alum who grew up in and around the park attending Asbury Elementary and Merrill Middle School before spending her high school years on the corner of Louisiana and Franklin. Jade’s not the only one with some serious roots. Gavin Brown is also a fourth generation South graduate. His artistic talent was nurtured in our neighborhood schools starting with his time at Steele. Gavin has already lived through more heartache than his young life deserves, and he has used the creativity to heal some deep grief. Selah Bourgeois is a third generation South graduate, and is the fourth generation of her family to live in her Wash Park Bungalow two blocks from South. She’s been a Girl Scout since she was a little girl, and along with the rest of her troop, has been raising money for years for a trip to London and Paris this month. Now, Selah has to add that to the list of disappointments.

Emma Hoeschler coached her younger sister’s soccer team at the Wash Park Rec. Center, and heads to CU Boulder in the fall after her graduation from South. Leon Roell grew up in the schools around the park, and was in the first ever graduating class of DSST Byers last week. Brynn Joy Kinner takes her considerable musical talents from the halls of South to college in New York City in the fall. Jordan Chamberlain, once known for her monkey climbing skills (she used to scale the brick wall at Lincoln Elementary) is headed to Boulder in the incoming class of Buffs.

Peyton Lea grew up in our neighborhood, and will make us proud as a Ram at CSU in the fall. Before she could go, she turned 18 a few weeks ago, and was treated to a drive-by car-honking and people-shouting birthday celebration from family and SE Denver friends. Findlay Burnett started kindergarten by riding his bike through the park to Steele. He ended high school by driving his yellow VW bus around Wash Park on his way to South. Will Kingston completed his credits needed for graduation in January so he could spend February and March working on top of a volcano in Chile. He’d still be there, on the adventure of a lifetime, but, well, you know why he came home.

Wyat Stephens grew up in a house across the parking lot from South, and Wash Park was like an extended backyard. He’s also in that first graduating class from DSST Byers. Before he heads to Notre Dame in the fall, he hopes to do some scooping at his summer job at Bonnie Brae Ice Cream. Bian Stahl was adopted as an infant from Vietnam, and spent 14 years in Wash Park before moving with her mom to Seattle. But Bian’s coming back home to study neurobiology at DU. We’ll be proud to have her back in the hood. Grayson Gifford and Leo Ochoa are “brothers” on the South baseball team. These batterymates led South to the first playoff appearance in many years in 2019, and we’re so sad we don’t get to see what they would have done this spring season.

Nobody epitomizes the spirit of the COVID Seniors of 2020 better than Weston Ferguson. When he learned that in-person school was canceled for the rest of the year, he was excited for the extra time to ski and rock climb. When he was told the ski hills and climbing gyms were closed, he got fired-up to do some extra hiking. When state parks started discouraging hiking so people would stay home, Weston turned his attention to slacklining. He’s been excited, finding the best Wash Park trees to suspend himself between ever since. Good luck trying to keep Weston and his classmates down.

These are just a handful of the stories of the many Wash Park COVID Seniors of 2020. Their lives thus far have been bookended in unprecedented ways, almost as though we needed to prepare them for something special. They are uniquely qualified to make a difference. We can’t wait to see how they deliver.