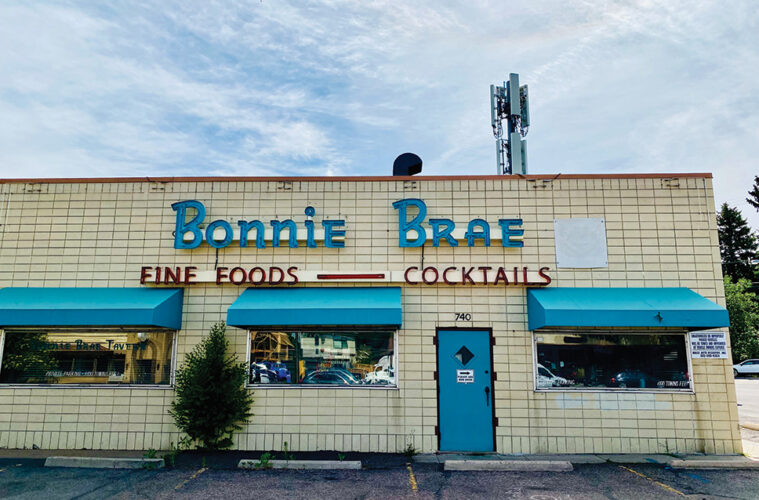 We have lost so many strong Denver institutions over the past few years. El Chapultupec? Are you kidding me? The Market? Noooooo. Bonnie Brae Tavern? Oh, Hello no. I have struggled for years to articulate my feelings regarding the evolution of Denver and specifically the neighborhood of my youth, Washington Park. But dammit, losing Bonnie Brae Tavern is the hardest pill to swallow and deserves this long-awaited diatribe.

I grew up on the 1100 block of South Williams in a house my parents bought for $28,500 in 1973. My grandfather told them they could get something nicer and cheaper in Arvada. They thanked him for his feedback and never rubbed their generous accumulation of equity in his face. Eventually, twenty plus years later he did acknowledge that it may have been a smart investment.

The previous owner had burned a hole in the floor in the back of the house and we left it there for years, always walking carefully around it so as not to twist an ankle or tear through the ceiling down below. Many of my neighbors were elderly and there were only a few kids on my block. A stark difference from the neighborhood today.

The Washington Park of my youth was a middle-class neighborhood. My parents were guilty of being one of the first families to “pop the top,” the term we used for building a second floor on a bungalow. It was a move looked at with skepticism and oftentimes contempt until the future “scrapes” began, and really lit the neighborhood up. My neighbors were mechanics, shop-owners, city employees, teachers, civic leaders. Minoru Yasui lived across the street and if you don’t know who he is, shame on you.

The east side of the park, (just north of the Mississippi entrance), had Hippie Hill which was a weird combination of biker gangs and stoners. It was a nice juxtaposition to the older folks and their fedoras lawn bowling next to the flower gardens, oblivious to the chaos down the hill. Crawdads were captured in the ditch, cigarettes were smoked on Monkey Island. South High Seniors would toss Freshmen into the lake at the beginning of each school year.

The park was our town. Parents trusted us to play, practice sports, skate, meet up with friends and later aggravate young families as inappropriately-aged teens playing on the playgrounds. We learned to swim indoors at the pool and our moms did aerobics in the gym with a wide swathe of women between ages 17 and 95. Dads played pick up basketball on the outdoor courts.

It is embarrassing and humbling to say this, but I resent Washington Park. I feel like it left me behind. It dumped me and moved on to wealthier and prettier residents.

I have never once walked or driven by my old house without crying. My dad helped draft the plans for our “pop-top” addition and rewired much of that house himself. I can still feel the cold concrete of the front porch under my feet during a classic old-school Colorado thunderstorm. I can smell the rusty metal of the hinges on the bookshelves around the mantle and the smell of lemon polish on its ancient wood. I can see my yellow lab sleeping in the sun in the family room. My parents made sure every improvement added more natural light.

Is a house really just a house? Because that bungalow feels like a living, breathing being to me. If I were to find a way to describe how it/he/she feels to me, it would be a combination of Big Bird, Santa Claus, Mrs. Butterworth and a kind Victorian grandfather. I remember every blemish and every beauty mark. I thought there was a ghost living with us and sometimes I would wake up in the middle of the night and see someone at the foot of my bed. I would do anything to see that ghost again.

When anyone tells me they live in Washington Park, I feel a physical pang of homesickness and sadness. I don’t think it will ever go away since I’m 46 years old and it hasn’t lessened in the twenty plus years since my parents moved. I want to be bigger and stronger, but my gratitude for the youth I enjoyed there feels overshadowed by my longing for the home I no longer have.

Alas, time marches on and the neighborhood is not the neighborhood of my youth. The Campus Lounge (the Pus to us), has had multiple owners over the past several years, Bonnie Brae Ice Cream has reached some kind of insane cult status, and now we say goodbye to Bonnie Brae Tavern. The site of my 15th birthday which resulted in a not-insignificant food fight. The home of my cheeseburger pizza. The last vestige of my middle-class neighborhood. The Dire family deserves to move on after 88 years. I will always be happy for the success of a fellow South High grad, but this is a big loss.

We don’t live in Denver anymore and have built an incredible life somewhere else where we are the new people who don’t truly understand the history of our own neighborhood. I try to be very sensitive to those who came here before me and to respect their frustration as this area changes rapidly as well. Maybe someone else is driving by our home with tears in their eyes struggling to reconcile their future with the past.