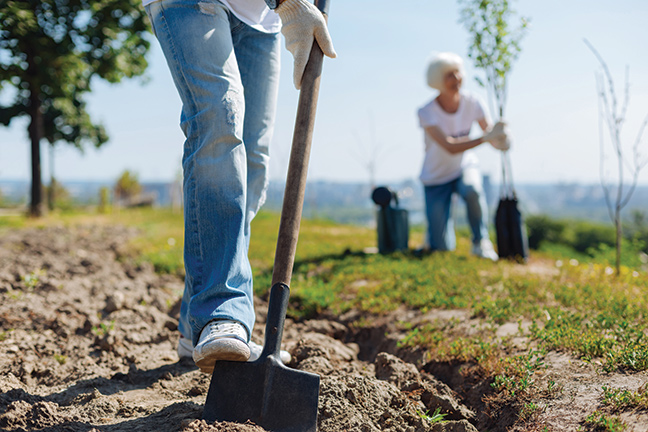 Earth has been circling the sun unremarkably for approximately 4.54 billion years. Homo sapiens are celebrating their 200,000th+/- birthday as a species. But, it wasn’t until the last 50 years that we humans formalized our relationship with Earth with the celebration of Earth Day. A day we notice, appreciate and even make resolutions to improve our relationship to this rock that shepards us safely around the sun at 67,000mph (30km/sec). How will you celebrate the 50th anniversary of Earth Day? What are your resolutions and how can you keep them longer than the average 18 days we humans keep our New Year’s Resolutions?

While there are many ways to reduce, reuse, and recycle, there may be no better way to make a seven-generation style-lasting impact than planting a tree. Google ‘plant trees Denver’  and the first link below the ads takes you to The Park People, a small but powerful organization dedicated to preserving, enhancing, and advocating for Denver’s parks, recreation resources, open space and urban forest. For 50 years (coincidence Earth Day, I think not!), this skeleton crew, working on an even slimmer budget, has partnered with Denver Parks and Recreation on capital improvement projects such as the Cranmer Sundial, breathing life and new energy into our beloved park system. But that’s not all…you’ve got their website open, click through ‘What We Do’, ultimately alight for a longer read on Denver Digs Trees, a flagship branch of The Park People, distributing free and low cost trees to Denver residents. Here’s the back-story.

‘Why trees?’ you wonder, ‘Wasn’t Denver a grassland before humans heard the word ‘gold’ and rushed in to prospect? Beyond the breathtakingly simple science of trees sucking up a portion of the carbon dioxide belched into the air by our bodies, houses, and cars and releasing sweet clean oxygen, trees also beautify, shade, and cool those same things. Step out of the parking lot and under a tree just once and it is easy to appreciate that trees are the lungs of our city. The Park People is not simply reclining in the shade, watching the leaves flutter against a brilliant blue sky. Each tree they award is backed by a rigorous dig into the gritty biological, physical, and social science of the tree and its future home.

After checking out Denver Digs Trees you commit to planting six trees on your property this year and, sigh, wouldn’t it be gorgeous if they were all maples? You cheerfully select six, happily hand over $35 per tree (what a deal!) and await approval. Eventually the phone rings and there’s a friendly person from The Park People calling to review your application. By the time they walk with you through the science behind your tree preferences, you thank them for offering you two maples and a plane tree.

A resilient ecosystem is one which can withstand storms, infestations, drought, and pollution. There is no single species that can withstand all of this plus the unpredictable future forecasted by a 1-4 degree rise in global temperatures. Diversity is the strongest tactic in building ecological resilience. Monocrops and large stands of a single species are sitting ducks for hungry pests arriving by boot, boat, box, or backpack. With an easy food source, pests thrive, prosper, procreate, and ultimately devastate a crop. Today it is the Emerald Ash Borer which threatens one out of every six trees in Denver, tomorrow it will be another pest, fungus, or blight threatening another beloved variety of tree or plant. The pros at TPP respond to this by limiting any one household to no more than 4 of one variety of tree. Each year, the selection of trees varies slightly to increase the diversity of Denver’s urban forest. This buffers it against the vagaries of climate change, provides a more varied and steady diet to urban wildlife, creating a true corridor for migratory birds and home for resident fauna.

Unlike animals, a plant often has as much or more, biomass below ground as above. Your six trees may seem like they will fit and, if you look around at your neighbor’s you may see trees growing much closer together than the application states. Forestry professionals study the pros and cons to dense stands of trees in urban environments and agree that with Denver’s propensity for drought, it maximizes the value of each tree if we space them far enough apart that each can grow to its full potential height and breadth.  By limiting root competition and spacing tree planting according to mature size, we use a lesser overall amount of water per square foot of canopy coverage. ‘Makes sense,’ you say ‘thank you.’

‘While I have you, mind if I ask about the different prices?’ The application says the price per tree varies between $0 and $35. Within Denver, there is an uneven distribution of trees. These neighborhoods are, on average, 12 degrees hotter than other areas of the city which leads to increased hospitalizations and deaths as we experience new record highs yearly.  These areas are also linked to historic and discriminatory red-lining policies of the 1960s and they still rank lower on the socio-economic scale. In addition to extensive canvassing and outreach efforts, The Park People strives to meet the city’s stated goal of 18-20% canopy coverage citywide by offering trees for $10 to these lower canopy neighborhoods. Homeowners within other areas of the city still receive trees for only $35. Similar trees retail for around $150 so, regardless of the price you pay, the trees you are awarded are a killer deal. Each tree in turn, when planted in the right place and given the right care, rewards you with the knowledge that after you and your children have come and gone, it will continue to inspire daydreamers of the future in its cool, dappled shade.

Thus, each tree you purchase and plant through Denver Digs Trees has undergone a rigorous, site specific biological, physical, and social equity assessment. What, you might then ask, might you do with the money you are saving by not planting those extra three maples? For each $150, The Park People plants a tree. By supporting this organization, you fund a truly local, well-researched, evidence-based organization dedicated to saving the planet, one tree at a time. With warm thanks to the MDC Richmond American Homes Foundation and an anonymous donor, The Park People is jump-starting this year’s 50th Anniversary of Earth Day with a $20,000 matching grant that will make our community’s donations go even further this spring season during our Denver Digs Trees campaign. Donate today at www.TheParkPeople.org