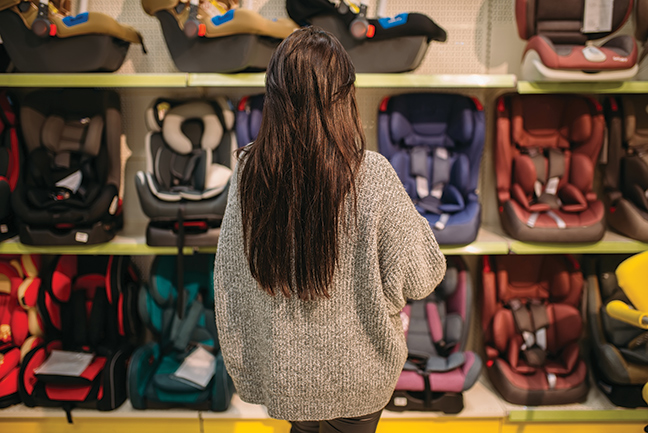 A HUGE MISSION TO SUPPORT OUR WEE LITTLE NEIGHBORS

When they started WeeCycle in 2008, founders Sunny Heydorn and Jayme Ritchie were inspired by the blessings of both becoming mothers for the first time at around the same time, and their own good fortunes. As they amassed the gear required to care for their own infants, they couldn’t help but wonder how economically challenged families provide for their babies. It wasn’t a passing worry. Between requests for donations of baby gear from their friends and neighbors, and going to literally hundreds of garage sales, they began to fill Jayme’s garage with baby stuff.

As the name implies, WeeCycle recycles gently used strollers, cribs, car seats and all the other things wee little people need to thrive. The challenges of twelve years ago were much different than the challenges of today. Back then, they had to convince the organizations who work with young families around Denver that they were legit, and that they really wanted to give baby gear and diapers away for free. Now, they support 50 partner programs around town who help a wide variety of young families, from refugees to teen moms, with another 30 such programs on a waiting list to receive services from WeeCycle. And they have long since outgrown Jayme’s garage.

In fact, WeeCycle just moved into a new 3,000 square foot warehouse in January. As Executive Director Morgan Seibel explains, the new space not only makes storage and distribution of their gear and diapers safer and more efficient, but there is also enough room for volunteer groups to sort and organize incoming donations.

You might have noticed the WeeCycle mini-school bus driving around the metro area collecting donations from their 15 drop-off points where Denverites can bring their baby gear when their children have outgrown it. Morgan gushes about the generosity of all the businesses and private residents that serve as donation collection points, but she is particularly thankful to Sally from Timbuk Toys for taking gear donations at all four of her stores. Sally believes deeply in the program, even if it costs her valuable inventory storage space to hold and transfer WeeCycle gear between pick-ups.

Thursday is a big day each week at WeeCycle. That’s when Morgan and her four part-time staff members gather at the warehouse to fill donation orders placed by the social workers and caseworkers at partner organizations. They are all assigned specific pick-up appointments to keep the chaos to a minimum, and get the gear and diapers distributed to the families in need in the most efficient way possible.

Keeping it all organized has grown to be a massive undertaking as WeeCycle has a $660,000 budget for 2020. They collect and re-donate 244,000 pieces of wee gear each year serving over 16,000 families. One of the two most in demand items at WeeCycle are car seats. They calculate that they ensure over 1.4 million safe rides per year to their carseat recipients.

The other items in highest demand are diapers. WeeCycle has a dedicated staff member who manages their diaper bank where they collect and redistribute diapers and baby wipes. Morgan explains that they could never have too many diapers, and it is the one thing they have to ration and conserve so all families served get an adequate supply. And the diaper bank has a massive impact on WeeCycle’s efforts to help families experiencing poverty parent with dignity.

Morgan tells the story of a mom who had a diaper budget of only two per day, and she could barely afford that. The mother was heartbroken when she changed her daughter’s diaper every twelve hours because of the unsanitary exposure her daughter endured. The diaper rash was excruciating for the infant, and made the mother feel like a failure as a parent. Through the support of the WeeCycle diaper bank, the infant received the proper and hygienic care all babies deserve, and the mother could shed the shame and guilt of not being able to adequately provide for her precious little baby.

Morgan reminds us that for many Denver families, we have an inventory of strollers for different occasions. The umbrella stroller is great for traveling, the jog stroller gets parents and children around the park in style, and the cargo stroller that secures the pumpkin seat makes transition from the car a snap. But for families stuck in poverty, a single stroller with lots of storage room is the main mode of transportation to get the family around town, and to and from work and daycare. It is not an accessory, it is a necessity, and strollers are serious business at WeeCycle.

Speaking of daycare, most centers won’t accept infants unless they are accompanied by at least a week’s supply of diapers. That’s another reason the diaper bank is such a core part of WeeCycle’s mission to help Denver’s young families in need.

Morgan encourages us all to get involved at WeeCycle, and they have a variety of ways we can help. New this month, WeeCycle is introducing their Decorate a Onesie program. For a $25 donation, individuals and businesses receive a onesie that they decorate, with the most creative and artistic onesies going on display at their April 25th Blues, Brews and BBQ fundraising event. For more information on the Decorate a Onesie program, or for sponsorship, silent auction or ticket information for Blues, Brews and BBQ, please check out their website at WeeCycle.org.

The website also lists all of their donation collection points around town, as well as the various partner programs they support. You can also learn more about bringing your volunteer group to WeeCycle to sort and organize incoming donations at their new warehouse. And of course, they are always grateful for financial contributions to their efforts to help Denver families end the cycle of poverty, and give the infants in our city the start to life they deserve.