We were lucky to catch up with the boys of the Denver band Strange Americans. The last decade has seen them release three full-length albums, perform over 275 concerts, and clock countless hours of writing, recording, and meditating on what it means to be a creative force in Denver. Their high-energy live performances and carefully crafted lyrics and arrangements speak to a wide audience. Brian Johnson from Marquee Magazine calls it “straightforward, no-frills rock and roll heavy on songwriting and storytelling but presented with reverb-drenched punch and passion.”

If Strange Americans had their own Big Bang Theory what would it be? How did it all get started?

The band started from a group of mutual friends and Craigslist ads. We shared musical ideas through 2009, playing a first gig in early 2010 at the Bulldog, a bar that has since been replaced by Lost Lake. Our first EP released later that year and we did a local release show at Larimer Lounge. Since then we’ve played all over Denver, and regionally and nationally. 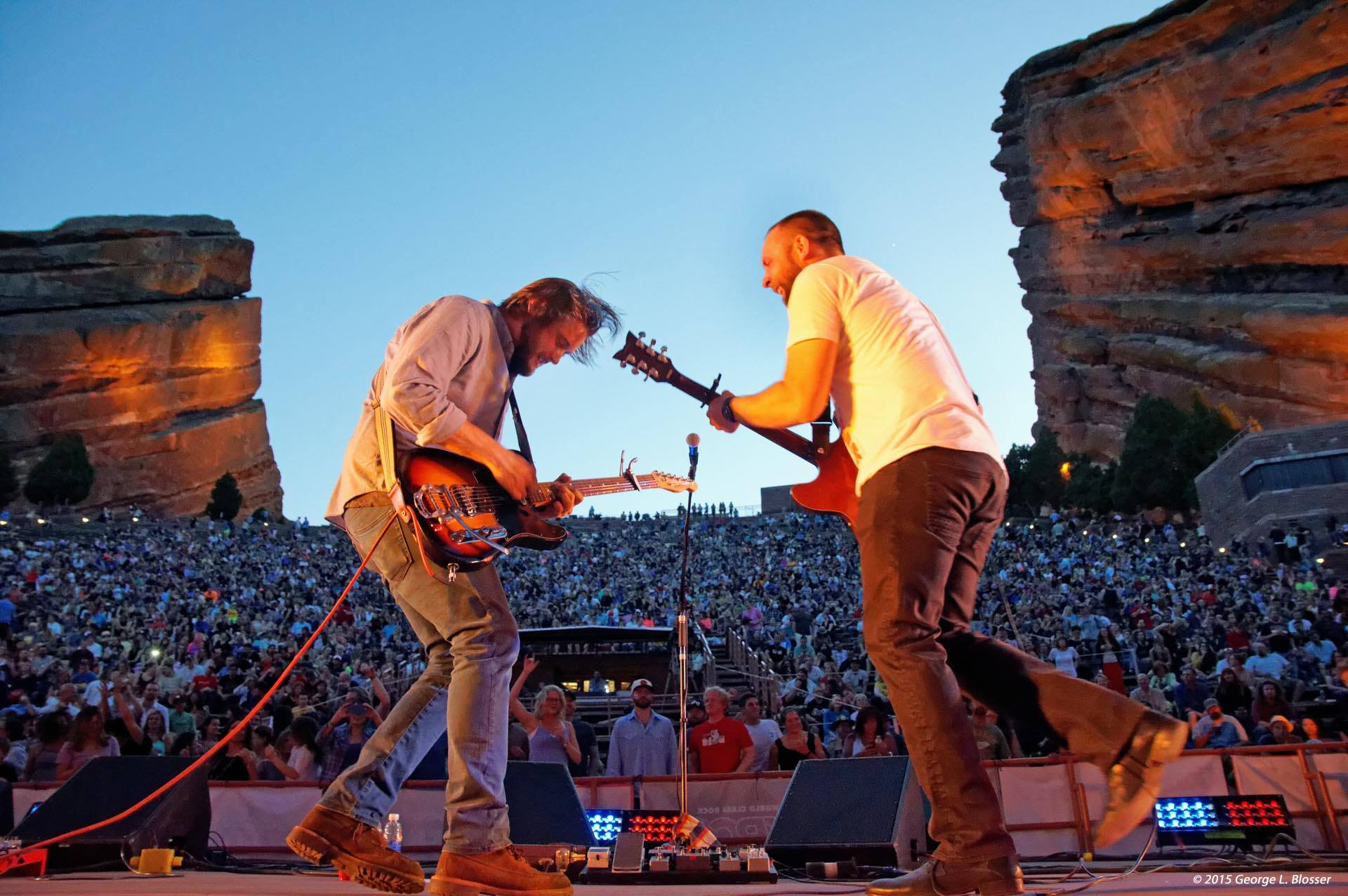 Strange Americans started out a decade ago, so the band is established now. Have you seen the industry change in that period of time?

Is it hard to adapt to the ever-changing music industry? Adapting to a changing industry can be tricky; it’s a gamble on where to spend time, energy and resources. When we started, most of our fans were buying CDs, but now we find that people mostly want vinyl or use streaming services. Early on that was a difficult headspace to be in, reacting to the change and uncertainty of an at-times-fickle industry and scene; now it just seems to be a part of the life and career we’ve chosen. So the challenge becomes more how do you sustain your creativity as an artist, knowing when to and when not to get caught up in what’s happening externally in the industry. We’re all creative people who have committed large parts of our lives to this craft, so juggling work, life and relationships is a challenge. We’ve grown in these challenges but the industry folks in Denver have made the journey enjoyable.

Is there any wisdom you can share with younger bands just starting out?

Be prepared, be polite, and end your set on time. Meet people and always thank the venue and their staff for their services. Also, for most creative people, we need to think of pursuing a life in the arts as a way to fuel your passion sustainably; so you need to be aware of situations and actions that drain your energy versus those that feed your energy. Find a way to capitalize on situations and tip that balance favorably with the long view in mind—don’t do things that you think will burn you out over five, ten, 20+ years. 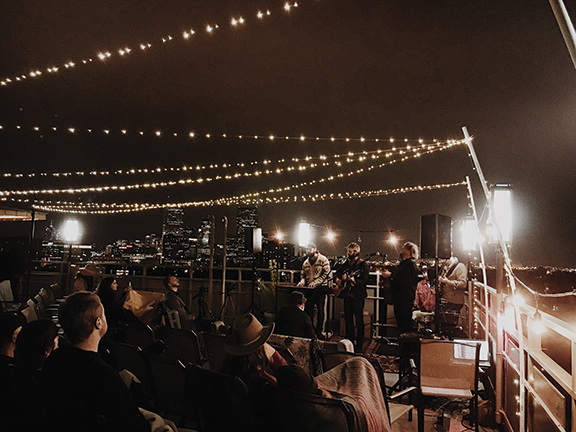 Does your name Strange Americans seem even more relevant today than when you originally named the band?

Funny you ask that: we just played a show in Hazel Green, WI a few days ago and the emcee introduced us by saying “this next band is just like you and me, please welcome Strange Americans!” We find more and more that our band name taps into embracing our own and everyone’s individual craziness and uniting as Americans through a shared sentiment of acceptance of differences. And given recent events, the name helps create common ground among different communities where we tour. The name, and the idea, helps us build community.

You guys have so many great songs and it’s really fun to see them stripped down in different live performances. Have you ever thought about releasing additional versions of these songs?

As a touring band, we find our songs taking on new life after playing them hundreds of times. We like when songs evolve, which often includes trying out acoustic versions. A lot of rooms we play have different tastes and requirements, so sometimes we adapt to a room and end up with a different version of a song. For example, every Thanksgiving season, we play an acoustic set at Swallow Hill Music; a few years ago, we released a video series of those acoustic versions—recorded live at Swallow Hill—on YouTube, and will probably be mastering those songs and releasing them on Spotify and Apple Music. 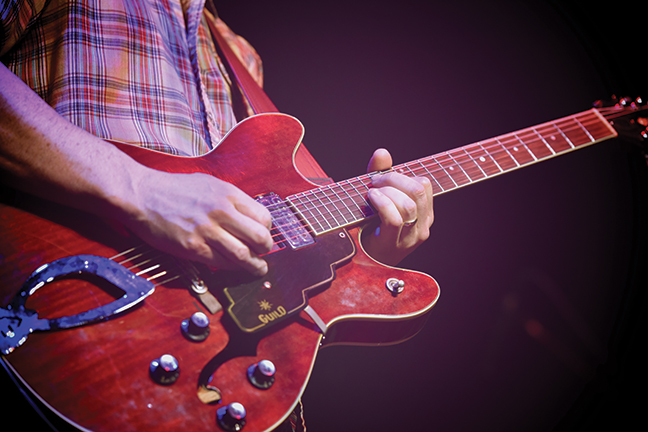 You guys are on tour right now, what’s it like being on the road with Strange Americans?

Sometimes it’s hard, but mostly fun, and we feel like we’re doing something important so it’s motivating and exciting to be out on the road. With that said, the van does get smelly, and we get less sleep than we expect. We tell lots of jokes and eat chicken wings.

Do you have favorite places to play outside of Colorado?

Illinois and Wisconsin are favorites of ours, but we’ve also been to both coasts and played some beautiful places along the way. Some other highlights would be Mercury Lounge in New York City, SXSW Music Festival in Austin, and Hood River, OR.

If you had to make a mix tape of bands that are currently inspiring you, who would be on that cassette?

Your last album, “Borrow You, Brother,”  came out in 2017. There’s a lot of excited people out there hoping you release some new tracks. Is there anything coming down the pike?

On this tour we booked a couple of days off to spend time in a home studio and work on songwriting and arranging new material. We’re really excited about the direction of this next batch of songs. There’s a lot that goes into making an album, which makes it difficult to plan a release this far out. We’ve also got growing families in the band currently, so we’ll be looking to have our ducks in a row for the next album later this year. Then we’ll start scheming release plan and timeline.

When’s the next time fans can catch up with you guys in Colorado?

We’re scheduled to play the UMS in Denver at the end of July, schedule forthcoming. Check our shows at www.strangeamericansmusic.com.

Get a glimpse for yourself and check out their latest video Till You’re Told and join us July to check them out at UMS!