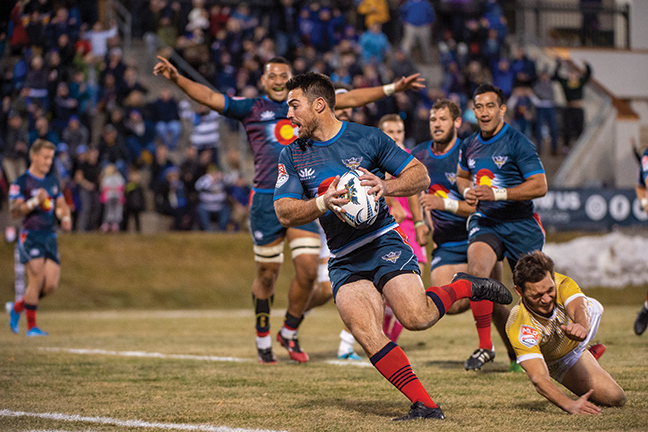 Winston Churchill once said, “Rugby is a hooligan’s game, played by gentlemen.” If you talk to the fans, and everyone who works closely with the men who make up the Colorado Raptors, they would agree that this team is comprised of fierce men with hearts of gold. The growing popularity of the sport combined with their quality efforts in the community, had us intrigued. We sat down with Pam Dunbar, of Infinity Park, to discuss the team and their upcoming season. 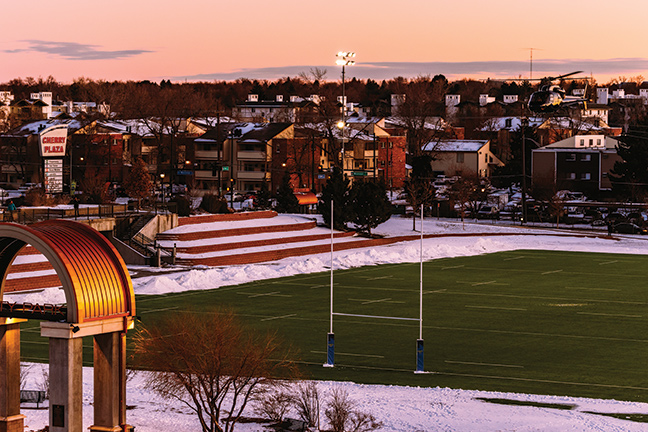 The Colorado Raptors, our home rugby team, started in 2007, but a large percentage of Denver is still in the dark about this impressive group of men. Can you tell us a little about the team?

The Colorado Raptors were previously known as the Glendale Raptors and have been playing rugby for three years at the professional level. The Raptors were one of the founding members of Major League Rugby which encompasses twelve teams across the U.S. and Canada. With the jump to a major professional sport, the team rebranded in late 2019 to build a bigger fan base and really embrace all of Colorado and the region as the professional rugby team.

Infinity Park in Glendale is the first rugby specific stadium built in the U.S. Mayor Mike Dunafon and the city took a big step placing a pillar for rugby in the U.S. by building a stadium and creating an amateur team and children’s rugby programs. The city has dedicated many resources to help build the rugby community in America and develop rugby players. The team is made up of around thirty men. Currently, the league allows teams to recruit players from overseas since the depth and experience of U.S. rugby players is limited but growing. By bringing in players from other countries, it ups the experience of the American players and also helps create a strong rugby culture for the team. 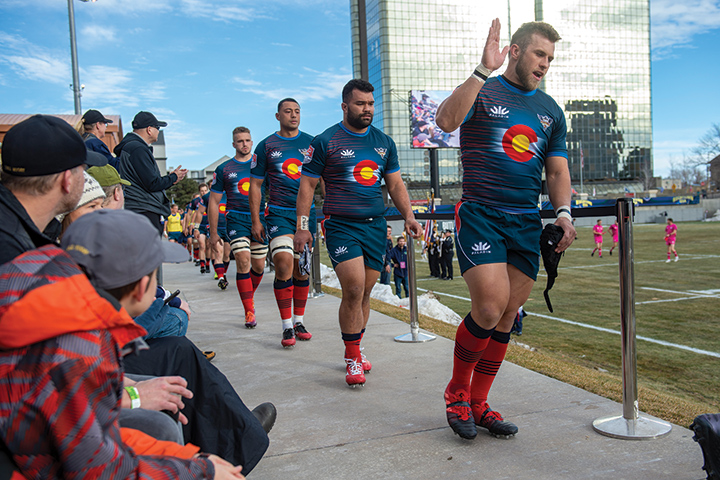 Rugby is one of the fastest growing sports in the world, but its footprint in the United States a decade ago was still small. Why do you think this is?

Sports in the U.S. have a long history with a very traditional fan base. Sports like football, baseball, and basketball have been around hundreds of years. Rugby is really a very different cultural experience and is considered a gentleman’s sport.

It seems that with the development of American football – which evolved from both rugby and soccer – there wasn’t a space for rugby. That is changing as rugby is growing and promotes player safety and inclusivity, meaning many men and women play rugby. That is highlighted in Glendale as the women’s team has won the national championship the last two years. Rugby is a sport for players of all shapes and sizes and anyone can touch or pass the ball and score during the match.

It takes a champion to get things started and Glendale is proud to be a place that has taken up the torch for building the rugby community in the United States. It also helps that we have a number of expats from other countries that are familiar with rugby and have helped the engagement and growth of the game by being involved as fans, coaches and players. 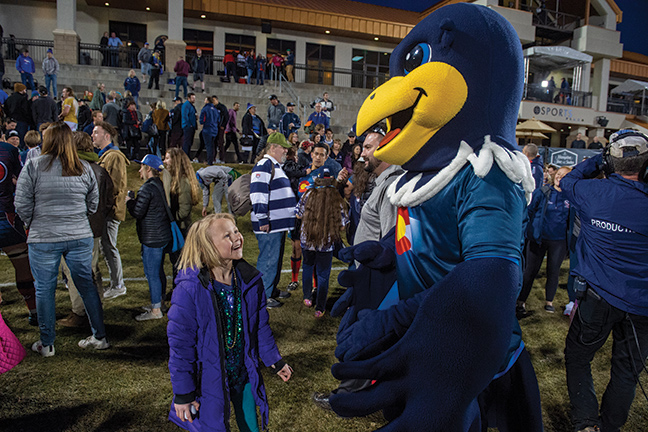 The Raptors may come across as a menacing, fierce group of men. But collectively they are a shining example of giving back to the community. Can you tell us a bit about their volunteer efforts?

The Colorado Raptors are tough on the pitch but are big supporters of giving back to the community. That is a very important element of rugby culture. Over the years our rugby players have volunteered at food banks, visited the Children’s Hospital, assisted with youth and high school programs and taught the game of rugby at Denver Health. Currently, we have several players coaching and mentoring the next generation of players by working with youth around the metro area. Players love interaction and read to elementary aged children at bookstores, and at schools. The team has also been active with veteran’s organizations and is always looking for more ways to help grow more touch-points within the community. At each of our matches this year we are hosting various charities and donating tickets to these organizations that they can share with their supporters.

What is your connection with the nonprofit organization, Nature’s Educators?

As we looked to re-brand to the Colorado Raptors last summer, we were looking for a partner that had live raptors that we could “take under our wing.” We discovered Nature’s Educators and all of the great programs that they do across the state and region to promote wildlife and birds in particular. We are excited to have them at all of our home matches this year sharing birds that they have under their protection and educating our fans about the raptors that are out in the wild and not on the pitch. 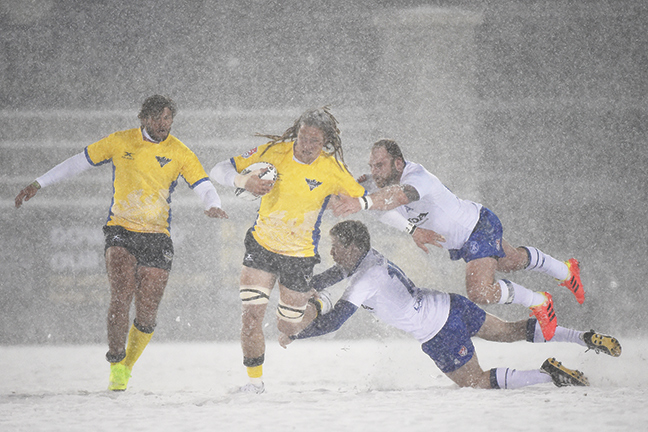 There is an array of programming offered at Infinity Park. Can you tell us about your youth programs?

We have proudly offered a youth rugby program for the last several years. Children between the ages of five and fourteen can participate. Youngsters learn the basics of rugby including running, passing, catching and kicking. The program expands as they move up in age to flag, tackle and there is a full-fledged high school girls camp in the summer. We plan to expand our program in the future in conjunction with other rugby organizations to help build rugby in Colorado through our youth.

What can newcomers expect for their first rugby game?

The environment at Infinity Park is electric. We offer general admission tickets for $20 which are open seating and kids’ tickets are $5. The pitch and stadium are close which provides one of the best and most intimate sporting experiences in town. The rugby community is very friendly and those who know and understand rugby are very good at helping newcomers. Each Raptors match is 80 minutes with a 15-minute half time. It gives fans enough time to get familiar and enjoy the game but doesn’t tie up your entire day at a sporting event. The Colorado Raptors matches all have themes which make attending fun for families. This year we have a kid’s day on May 2nd before our match against Rugby ATL where kids can try rugby in a fun and safe environment. We always have plenty of supplemental fun with face painting, live raptors, hawks, and owls, food trucks, games and much more. At the end of every match we open the pitch to fans so they can talk to players, take photos and get autographs. We are the only professional team in Colorado that is open and allows fans an opportunity to personally interact with players immediately following a match.

Where do you see the team headed in the next few years?

We are very dedicated to seeing the team grow and especially looking forward to helping train and build American players so that the United States can eventually become a World Cup contender. It happens every four years and was just held in Japan in the Fall of 2019. South Africa defeated England in the World Cup Final.

Are there any other events at Infinity Park we should be on the lookout for?

Infinity Park hosts a number of other rugby related events during the year. Last summer we hosted an international test match between the United States and Canadian national teams, as well as an international women’s tournament. Glendale is the only United States stop for the HSBC women’s rugby tournament. We also host an international sevens tournament in August, and host between four and five free movie nights in the summer. Our movie nights are open to anyone, and you can bring your own picnic and beverages to enjoy a nice evening under the stars while you stretch out on the field watching a movie on the jumbo screen.

Infinity Park is no longer just the venue for outdoor movies in the summer. We look forward to checking out the games with our kids this season and taking part in the energy of the crowd. We hope to see you there!