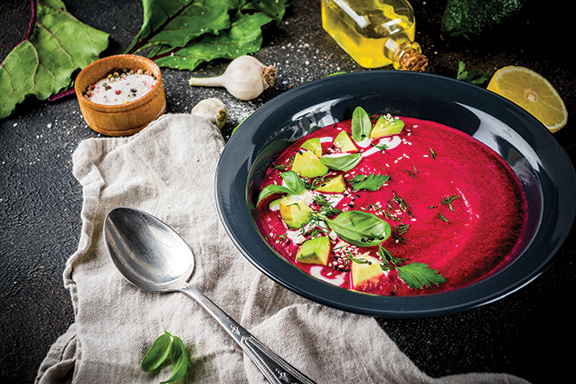 For thousands of years Spanish vintners have known that if they could endure the heat of July, their endurance would be rewarded with the ripening of both the famed Barbastro tomato and the blanco cucumber. According to Catalan lore, a local farmer’s wife was the first to conceive of a cold soup that celebrated the peak of the summer heat and the ripening of the tastiest vegetables in the garden. This sage matriarch must have known that her husband and sons would be ready at the end of the day for something that was a break from the heat and soothed the discord of local politics. We’re thousands of miles from those sun-baked rows of cumbers, but this month Jenny and I have felt exhausted by both Colorado heat and the political upheaval around us. We both wanted something to satiate our thirst for something wholesome and satisfying. Some people, insecure in their affections, turn their nose up at summer soup, but those that know themselves can find a ready counselor in a cool savory bowl of gazpacho.

Drizzle fresh olive oil in a 5-quart saucepan over medium to high heat. When the oil is shimmering hot, add onions, eggplant, red and green peppers and garlic. Saute until the onions are soft, about 8 minutes. After the veggies have softened, add tomato juice, Clamato, chicken stock, basil, chives, and parsley. Raise the heat until the mixture boils. As soon as the mixture starts to boil, immediately remove from heat, add the tomatoes and cucumber. Then cover the soup and refrigerate overnight to marry the flavors. Before serving, add sliced avocado, and cream cheese cubes. This soup stands on its own but thick crusty croûtons really bring out the taste of ripened vegetables.

While you wait for the soup to cool, head down to our shop on south Pearl. I’ll point you toward my favorite wine pairing for spicy soup—sparkling rosé. Pearl Wine Company has a number of bubbly rosés but my favorite for such a flavorful dish is the Casa de Valor. It’s fitting that the Valor vineyards are a tomato toss away from the Penedes region of Catalan where the first gazpacho was conceived. Valor is crisp and delicious and you won’t regret it for an awesome bottle, under $20. I hope this summer soup satisfies what you’re craving and soothes whatever burn you may be feeling. As always, bone apple tea.

“Josh Hillman is a certified sommelier by the Court of Master Sommeliers and the wine buyer at Pearl Wine Company. Jenny, his girlfriend, is the GM of Savory Spice in Littleton. They love to cook and love good wine. This column is about their journey through matching food and wine together to create the perfect pairing.”