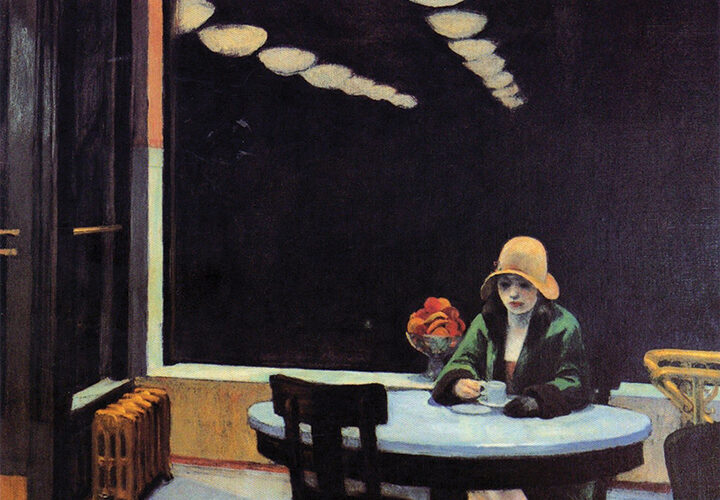 Halloween is nearly upon us, so what better time to explore a thrilling new crime fiction novel from local author Stephanie Kane set right here in the heart of Denver?

Both a lawyer and award-winning author of six crime novels, Kane was born in Brooklyn, and came to Colorado as a freshman at CU. She owned and ran a karate studio in Boulder, and is a second-degree black belt. After graduating from law school, she was a corporate partner at a top Denver law firm before becoming a criminal defense attorney. She has lectured on money laundering and white collar crime in Eastern Europe, and given workshops throughout the country on writing and technique. It would only seem appropriate that she also has two black cats.

Kane’s newest release, Automat (October 15), is the latest installment featuring heroine Lily Sparks, an art conservator at the Denver Art Museum. When the young actress playing the enigmatic woman in Edward Hopper’s famous painting of the same name is found brutally murdered at the launch of the blockbuster Hopper exhibition, Lily feels compelled to use her special gift of discernment to solve the crime. The much-anticipated follow-up to A Perfect Eye, we think you’ll love Kane’s deep dive into the art world – especially the work of Hopper, whose deserted cityscapes and isolated figures seem to have gained new significance in 2020.

Thank you so much for taking the time to speak with us and share a bit of your story with our Wash Park readers!

Wash Park is a favorite haunt. My second husband, John, grew up there and went to South High. Every time we’re in the neighborhood, John detours to drive past it! My dad loved the park too. When we moved him here from Brooklyn, he struggled to relate to his new surroundings. The geese and ducks and walking around the lake won him over. Since there aren’t many geese or ducks on the streets of Brooklyn, I think they triggered happy memories of growing up in Connecticut.

We love that your book is set right here in our backyard. Was it difficult to write a setting so close to home?

All of my books are set close to home. Sometimes the settings are lightly fictionalized (to protect the guilty), but they’re fundamental to the stories and often inspire plot twists. Because I need to visualize where a scene takes place before I can write it, I always go there. If it’s a venue like a theater or a museum, I try to catch the vibe. What do guests do in the lobby of The Oxford Hotel? How hard is it to read The Cruise Room’s drinks menu? How close to the paintings do Denver Art Museum visitors stand?

Tell us a bit about your protagonist, Lily Sparks.

Lily is Conservator of Paintings at The Denver Art Museum. From the time she was a little girl, her widowed dad trained her to be hyper-observant about what she perceives. What starts out as a way to bond becomes a talent that sets Lily on her path to becoming an art conservator. But you have to ask why a parent would train his daughter to do that. Is it to protect her—or to distract her from something he doesn’t want her to see? That question is the foundation for Lily’s character arc.

Lily’s talents were inspired by a real person: Amy Herman, an art historian who teaches med students, cops and FBI agents to be more observant by studying paintings in museums. That’s a cool skill for a detective. But I wanted Lily to actually do something, not just live in her head. An art conservator works hands-on with paintings to clean, repair and restore them. A sleuth with a fractured personal arc and passion for art could take us interesting places.

Do you see any of yourself in Lily? If so, which traits?

Like me, Lily is a former lawyer. For her, it’s an additional skill set; for me as a writer, a foot in a world that was familiar. We’re both neurotic, love cats, and focus on details at the expense of the bigger picture. Since Lily is better than me (and has a perfect eye), she usually redeems herself.

Have you always been a connoisseur of art, or has this been a new development since including it in your recent stories?

As a kid I loved museums. When my husband and I travel, they’re at the top of our list and often why we pick the places we go. John was in the Peace Corps in India, and along with works by local artists, we collect aquatints by Kaiko Moti, a Parsi watercolorist from Bombay.

Edward Hopper has been touted as the artist of Coronavirus with his ability to portray such isolation in his paintings, even when the subject is not alone. What was it about this American realist painter and printmaker that drew you to him for the focus of Automat, and was it by coincidence?

The subjects of my crime stories are never a coincidence. I picked Hopper because his paintings intrigue and disturb me. Art is meant to evoke an emotional response, and unless an artist’s paintings evoke that in me I have no business writing about him or them. What disturbs me about Hopper’s paintings is his women—I should say woman, since he seemed to paint the same hard-featured one over and over, usually through a doorway or window, almost always shown in profile or looking down. The men are disengaged or disempowered.

Hopper had a fascinating private life. For a long time it was believed that there were only two women in it: Enid Marie Saies, an English girl he met in Paris in 1906, who threw him over for a more dashing French suitor; and the woman he eventually married, fellow artist Josephine Nivison, who became his constant companion, business manager, and sole model. After Jo died, a decades-worth of letters were found in Hopper’s boyhood attic from Alta Hilsdale, a Minnesota socialite. Most were excuses not to see him. He kept all 59 of them, all but one neatly folded in their envelopes.

I’d think that pairing art with crime would take a very special skill. Why do you think Hopper works in your story, where others may not?

Juxtaposing art and crime—opposite ends of the spectrum, but in some ways mirror images—is thematically rich. What draws me to both is the powerful emotions that drive them, and the questions they raise about life. One manuscript I threw out involved abstract art. It was dead in all the wrong ways.

In A PERFECT EYE, Lily Sparks’ first crime story, the artist is Impressionist Gustave Caillebotte. Best known for his paintings of men with top hats and umbrellas on rainy Paris streets, Caillebotte was savaged by critics but undyingly generous and loyal to his friends Monet, Degas and Renoir. To explore the relationship between deception and art, I juxtaposed Caillebotte with a failed-artist-turned-forger who has a grudge against the art world.

Hopper’s paintings have been described as perpetually Sunday, depicting a world with no future. Intensely voyeuristic, they feature a stony woman who seems to be waiting for something to happen. In AUTOMAT, a killer who overidentifies with Hopper decides to avenge him by entering the picture as the missing man.

You’re originally from Brooklyn. What brought you to Colorado? How long have you been here?

In 1971, I enrolled at CU in Boulder. It was the only college I applied to. Why CU? I wish I could say I was drawn to the mountains or the party scene, but I picked it because it was 2000 miles from home.

We saw you were featured in 5280 last year, and they spoke a bit about an experience you had back in 1973. Can you touch base on that a bit? (Opportunity to mention Quiet Time, as well as your Cold Case Blog.)

My first novel, QUIET TIME, was a stand-alone mystery inspired by the 1973 Arapahoe County murder of my soon-to-be mother-in-law on the eve of my marriage to her son. In 2005, the novel became the catalyst for reopening the case. The twists and turns the cold case took, and my attempt to reconstruct the crime and make sense of my own involvement in it, are explored in Cold Case Story Blog, which is featured on my website (writerkane.com)

Oh my goodness – I can’t even imagine! Did your personal experience influence the path of your career (as both a lawyer and crime writer?)

Not consciously. I spent most of my legal career at a large Denver corporate firm representing banks, then did criminal defense work. I’ve always been more interested in what makes people tick than what they do, and as a kid I was a big Nancy Drew and Alfred Hitchcock fan. I think the cold case and having to come to terms with my role in the murder in my first marriage changed me more as a person than as a writer.

We saw that you’re being featured in the University of Denver’s OLLI Virtual Speaker series this month! Can you tell us a bit about your program “Stories Are People: Interview Techniques that Bring Narratives Alive” you’ll be teaching on October 20th?

Stories need real people to bring them alive. Before Lily Sparks, I wrote a series of legal thrillers starring dyslexic criminal defense lawyer Jackie Flowers. Jackie was inspired by a young relative, but I did a great deal of research, including launching a survey on my website and tutoring two learning-disabled men, to bring her alive on the page. Interviewing real art conservators and touring their labs brought Lily Sparks to life. My Cold Case Story Blog was a cold plunge into how to interview forensic experts and octogenarian witnesses to a forty-year-old murder. I’m presenting those hard-won tips at DU’s OLLI Speaker Series on October 20th.

Halloween is right around the corner. Are there any crime fiction books or series you would recommend for our readers to enjoy this month?

The Flavia de Luce mystery series by Alan Bradley. Flavia is a precocious eleven-year-old, fascinated by chemistry and talented in concocting poisons and solving crimes. Set in the quaint English countryside and narrated by Flavia, her mysteries are a fresh take on the world through a lonely adolescent genius’s eyes.