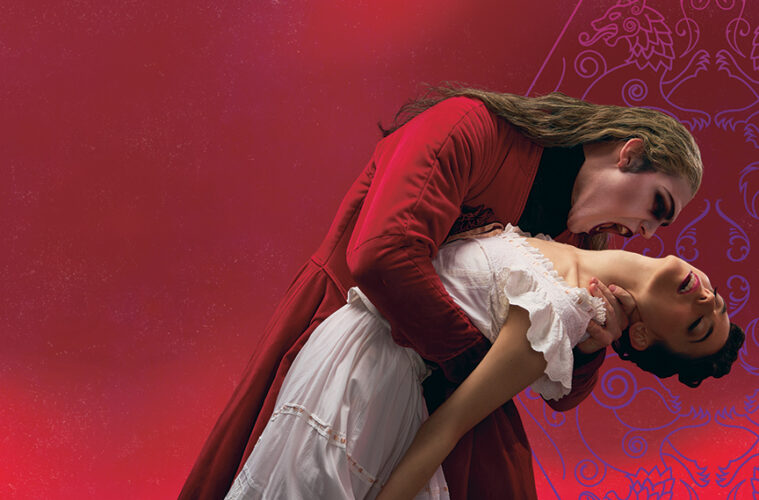 The Colorado Ballet is excited to open their 2022/23 season of stories just in time for Halloween. Dracula returns to Denver for the first time since its sold-out run in 2017 with eight performances. Back by bloodthirsty demand, The Count is back in town, with Bram Stoker’s legendary Gothic thriller set in 19th century Transylvania. This frighteningly fun ballet brings the story to life with Victorian-style sets and costumes, seductive vampires, and a Corps de Ballet of the undead. Featuring choreography by Michael Pink and Philip Feeney’s original score performed live by the Colorado Ballet Orchestra, this haunting, all-consuming performance promises goosebumps.

“Colorado Ballet is thrilled to bring Dracula back to Denver audiences this October,” stated Artistic Director Gil Boggs. “This production has become something of a cult favorite here in Colorado, and the level of enthusiasm we see from our patrons for this ballet is absolutely incredible. Every year we receive scores of requests to add Dracula to our season line-up. Now that it’s back, we can really feel the excitement from our patrons, and it makes our job of presenting this epic retelling that much more fun and rewarding,” continued Boggs. “Our dancers love performing Dracula as much as our audiences love experiencing it, and we can’t wait to show Colorado a scary-good time next month.” Boggs also shares that, “The story is easy to follow, the sets are grand, the costumes are lavish and the music is enthralling.  These elements coupled with Pink’s sensual choreography makes audiences feel like they are part of the action.  I encourage you to stock up on garlic and sink your teeth into this ballet full of terrifying excitement!”

As a scene setter, Dracula tells the story of Jonathan Harker, who travels to Transylvania to do business with the infamous Count Dracula.  During his visit, Harker is driven mad by the Count and his vampires and returns home. Dracula becomes enamored with Harker’s fiancée Mina and he travels to England to pursue her.  As soon as he arrives in England, Dracula seduces Mina’s friend Lucy and he changes her into one of the undead.  Dr. Van Helsing and Lucy’s suiters fail to capture Dracula, which enables him to capture Mina.  The men follow Dracula into a crypt to stop him.  Only daylight and a stake through his heart can stop him from taking Mina as his own.

The show will also feature singers from the incredibly talented Evan’s Choir. The Evans Choir is a chamber choir made up of professional singers and conductors in the Denver area committed to performing and promoting choral music at the highest level, often collaborating with other local and national arts organizations.

This incredible production and collaboration of the Colorado arts community is definitely not one to miss. Outside of the high caliber of production and performances, the Ellie Caulkin’s Opera House, simply known as “the Ellie” is a particularly spectacular backdrop for this event. With a rich and eventful history since opening in 1908, the Ellie has been renovated many times and most notably in the early 2000s when everything but its historic shell was rebuilt into a lyric opera house.

The Ellie is a world-class acoustical hall designed in the lyric style with four levels: balcony, loge, mezzanine and orchestra. The opera house is humidified and provides state-of-the-art technical support as well as acoustical excellence and clean sightlines. The Ellie is one of only three opera houses in the United States, one of nine worldwide, with seatback titling at every seat in the house.

Tickets for Dracula are on sale now and is sure to be a memorable event with family, friends, or a solo night with the arts.