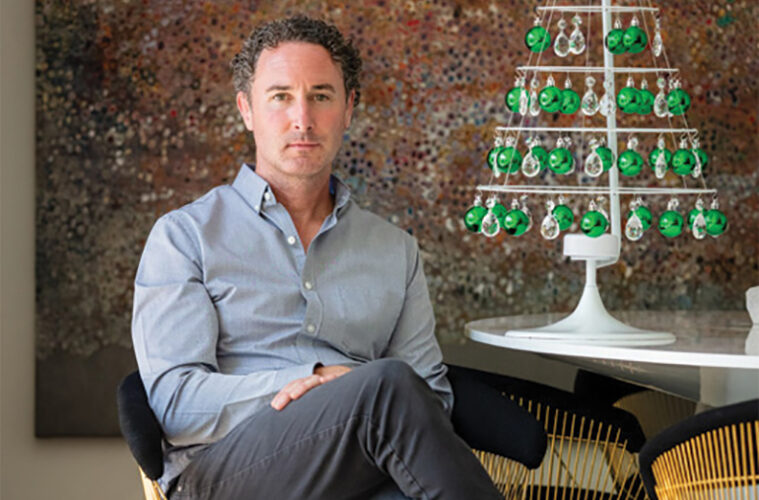 Putting a modern spin on the traditional Christmas tree, Modern Christmas Trees just opened in Cherry Creek North in the iconic Ginny Williams Gallery space on Fillmore and 3rd Ave. Founder Matt Bliss, a Colorado native, was inspired by the A-Frame Christmas tree his grandfather made when he was a child.

But it really all began with Matt’s grandfather, Lawrence “Bud” Stoecker, who was a masterful storyteller. He mesmerized family and friends with colorful stories from his experiences as an engineer and entrepreneur, building rockets for the NASA Apollo missions, constructing A-frame cabins across the Rocky Mountains, and bringing to life his very own Modern Christmas Tree. We were lucky to learn more about Matt’s journey bringing his grandfather’s vision to life.

Let’s start at the beginning with your Grandpa’s modern Christmas tree. Was he the first to design this work of art?

As far as I know, my Grandpa was the first to design this tree. There is certainly a chance that someone else may have come up with a similar design along the way, but this was his original idea.  As an aerospace engineer, and later in life, being an entrepreneur building A-frame cabins throughout the Rockies, it’s easy to see how he could come up with such a design.

What did you do before embarking on this journey?

Prior to starting ModernChristmasTrees.com I was in mortgage banking. I have always been a creative person and studied art and design in college. I see my Grandpa’s tree as a gift. It’s a gift that allows me to be creative and create things that didn’t exist before I touched them!

Was your appearance on Shark Tank the moment that propelled you? When did you first decide to build modern Christmas trees?

There is no doubt that Shark Tank gave us a lot of exposure. I don’t think there has been a single event that has “propelled” us.  It has been 10 years of hard work, and trial and error, that has gotten us to where we are today.

Shortly after my Grandma passed away, my Grandpa was diagnosed with Alzheimer’s, which was difficult on me and my family. I didn’t like the way the end of his life was going, so I decided to update his original invention and show the world his contribution to design. It’s his signature that is laser-engraved on every tree that I make. Since bringing The Modern Christmas Tree to life in 2011, it’s been a dream of mine to create a space to welcome in consumers to see the trees and experience their magic in person. To do this in my hometown, is the icing on the cake.

Since its launch, Modern Christ-mas Trees has grabbed the attention of Barbara Corcoran who invested in the company. Modern Christmas Tree has garnered coverage from national publications, including Architectural Digest, Entrepreneur Magazine, and Fast Company. The company has also gathered the likes of Hollywood’s Film and TV industry and has been highlighted on the Ellen DeGeneres Show and Netflix, in Cadillac commercials, and at the Disneyland Hotel. These breathtaking contemporary Christmas Trees feature Modus LED color-changing lighting for both the 8-foot and 10-foot trees. You can set the mood with any color of the rainbow spectrum by remote or application using your phone. Each comes with a Eero Saarinen-inspired tulip stand, a sputnik tree topper, glass bulb ornaments, crystal prisms and more. They are truly stunning.

While Modern Christmas Trees is celebrating its first retail shop, it’s not lost on the company that families impacted by the Marshall Fires on Dec. 30, 2021, are still rebuilding their lives. To give back, Modern Christmas Trees will donate 20 Jubilee Trees to families displaced by the fires, as well donate 10 percent of its Grand Opening sales to the Marshall Fires Community.

“Coming up on the year anniversary of the Marshall Fires and the holidays right around the corner, we are so grateful to Matt for this amazing donation,” said Meryl Suissa, founder of Marshall Fire Community, a group organized to empower disaster impacted communities to rebuild their future. “Modern Christmas Trees will no doubt bring some light into their lives for the holidays.”

We encourage you to see these beautiful trees up close and in person, their unique and seemless design make a bold statement. We are huge fans of the nostalgic element as well as Matt’s philanthropic nod. Thank you, Bud for your vision and Matt for carrying on this tradition for all of us to enjoy. For more information, visit: modernchristmastrees.com/store