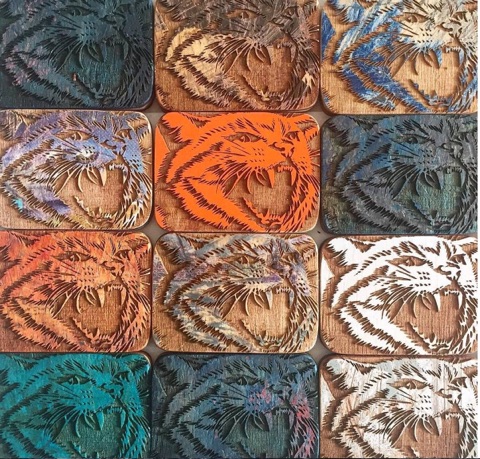 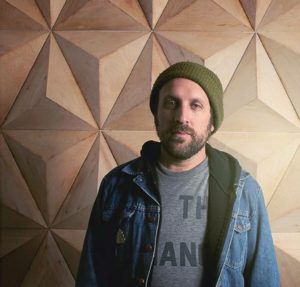 Derek Keenan peers into his laser-cutting machine, setting chunks of discarded skateboard into place. Bright lights slice the wood, forming the pieces into what will soon become someone’s favorite pair of earrings, or belt buckle, or necklace. Keenan, who is a Denver native, has been taking broken skateboard decks and churning them out into something fresh since 2006; his pieces are in demand internationally, but the Mile High City is lucky enough to be able to swipe something original, light weight and colorful at the Museum of Contemporary Art gift shop.
Keenan was inspired to repurpose discarded materials after four years living in the Gambia, working in the Peace Corps. Although not all of his work is created from refuse, it is always in the back of Keenan’s mind. “I’m always wondering how I can use every last bit of the skateboard,” he says, gingerly touching a table striped with skateboard wood scraps in his workspace, a room filled with afternoon alleyway light just above City O’City restaurant in the heart of Capital Hill.

Keenan took his skateboard-jewelry meditation the activist route a few months ago when he began a series of drop-shaped pendants with 2-D tigers etched in the center; $5 of the $35 for the piece will go to assist victims of sexual assault. 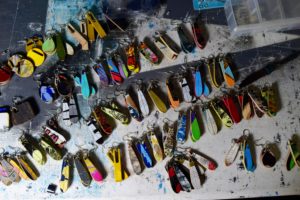 Most recently, Keenan has been commissioned by Dan Landes, entrepreneur and owner of City O’ City and Watercourse Foods, to aid in the reconstruction of Campus Lounge, 701 S University Blvd, set to open in early 2017. Keenan met Landes when they, along with Jonny DeStefano, worked on the concept of The Deer Pile, a communal space adjacent to Keenan’s studio. “Landes saw a few pieces in my studio that are similar to what I am working on for Campus Lounge – geometric shapes that are three dimensional.

The wall in the new restaurant will be a replication pattern with tetrahedron shapes, alternating patterns that are the same size,” says Keenan. The piece will be 20 feet wide and 7 feet tall, spanning from where the booths end to the top of the ceiling.  All told, there will be 125 shapes constructed from plywood, which will be stained black. Although, says Keenan, “when the light hits the shapes it looks like it’s different shades of grey, white and black.”

One of the joys of watching an artist like Keenan work is his sense of abandonment and play. “Sometimes I look at these shapes and think it would be great to put a succulent or two inside, take out some of the sides,” he says, eyes lost on the grains of the wood in his work.

While Keenan is momentarily focused on the Campus Lounge project, the walls are full of ideas in the works – signage in unusual shapes, drawings – he most recently finished a coffee table commission. The accessibility to artists and their work is one of the defining features of Denver’s cultural scene.

To anyone dining at Campus Lounge in the coming months, they’ll know that within each hand-crafted tetrahedron lies a story, a vision and the heart-through-handiwork approach of Derek Keenan.

@mukeedesign. If you are interested in purchasing his work it’s available at Derek’s Etsy shop at www.mukee.etsy.com.