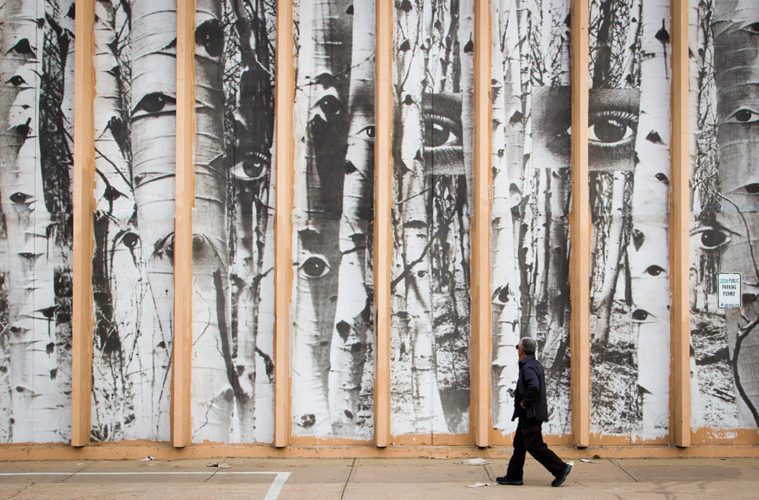 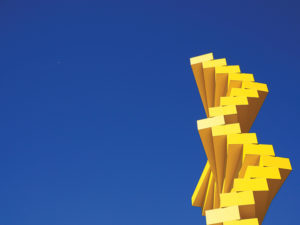 Driving through RiNo months ago, I stopped to snap a photo of some beautiful street-art that caught my eye. It was unlike the other murals, in fact, it looked like a photograph. It wasn’t signed, so I made it my priority to find the artist, knowing I HAD to feature this work. After reaching out to a few street artists, I found out that this was, in fact, a wheat-paste image entitled “The Lonely Metropolitan” (featured on our cover) by Herbert Bayer with Koko Bayer.

For those of you who don’t know, the medium known as Wheat-pasting is a process of using a simple paste made with wheat flour and water. Pretty simple recipe, the challenge is in finding a statement to make with each piece and a location to paste it where it won’t get painted over.
I contacted Koko through Instagram and even though we had never formally met, without hesitation she offered to take me on a tour of her art around Denver and even gave me a mini how-to session. “It’s really a simple process, that we all learned in pre-school.” After watching her complete a paste on a highly textured brick wall, I realized her craft goes way beyond what we learned as kids. Needless to say, I fell in love with her work and I feel grateful to have met her.

Upon entering her home in RiNo, I was taken aback by the colorfully unique art that covered her walls. I would soon find out that her taste in art, truly matched her individuality. As a transgender woman, she lives with her wife and kids and is well known in Denver as a sought after photographer. I felt privileged to spend the day and learn from such an innovative artist. 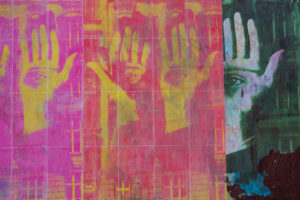 As we set off on our adventure, she began filling me in on the inspiration behind her work. I quickly came to realize that there was much more to the story than I had ever imagined. Her work deeply connected to her own family history.

“This project has brought me closer to my grandfather’s amazing work. I’ve been around it for decades, but it’s always been behind glass or hanging on a wall.  Physically manipulating these pieces has given me new insights into how they were created. For example, the Lonely Metropolitan, which he did in 1932 as part of a series of photomontages about dreams, is only 10“x13”, when you blow it up to 3‘ x 4’  you can really see every detail and how brilliantly it’s made.” 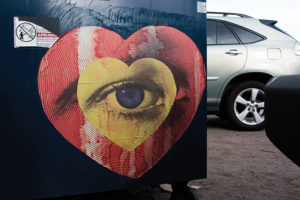 To know Koko and her designs is to know her grandfather, Herbert Bayer. The name may sound familiar, as he is responsible for the iconic, canary-yellow sculpture entitled “Articulated Wall” that stands more than eighty feet high. It is located within the Denver Design Center complex at 595 S. Broadway and can be seen from I-25.  Koko highlighted the fact that most locals feel a strong connection to the piece, but have no idea who designed it.  “The Denver Art Museum holds the Bayer archives and keeps a permanent display of works from it on the lower level of the Hamilton building.”

During his career, Bayer was a painter, photographer, architect, sculptor and designer of graphics, exhibitions, environments and typefaces. He was an original who broke boundaries when it came to fitting neatly inside the box of one medium. It is no wonder Koko has been so inspired by Herbert’s work and keeps his spirit alive by pasting his art in hidden corners of our city.

This all began three years ago when Koko started a documentary on her grandfather.  Then in late 2015, she was asked to curate an art installation at the Denizen apartments in the Denver Design District.  “For one of the 4 stairwells we did, I chose a series of Herbert’s images featuring eyes that I wanted to get on the wall. The only way to do it within my budget for the space was to use wheat-pasted paper prints.  It turned out amazing and it got me fascinated with the process and the idea of getting Herbert’s work out  into the World. ”

Koko set on a mission not only to educate people about Bayer, but to keep his art alive. From where we sit, her efforts in doing so have been successful. Koko’s installations have been featured in “Westword” and “Beauty Underground” and her Instagram feed @kokonofilter was named one of Denver’s twenty best by Westword. If you look closely, you will no doubt see her pastings around town. She makes a point to find the least likely location for a “canvas” and afterward, her “wall fragment” has without a doubt made the space beautiful.

This all started with me feeling so moved by a wheat past design on an otherwise forgotten wall. I’m so grateful to have been introduced to Koko and her art. She made me feel like a friend from the minute I met her and she shared her story so freely. I am proud to be able to share it with you and I hope you will seek out her work and the work of other wheat-paste artists around town. Each and every one of them begs to ask the question “What is the story behind this?” And, I assure you, there is always a story.