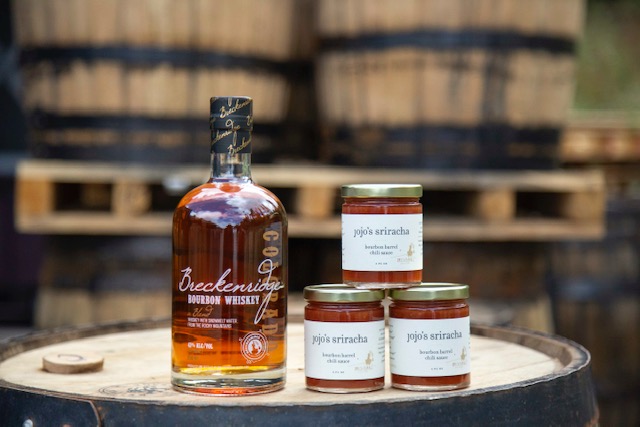 JOJO’S SRIRACHA will be releasing bourbon barrel aged sriracha — a new collaboration with Breckenridge Distillery — on Friday, October 1. Inspired to craft even more complexity into their award-winning red sriracha, Jojo uses the same charred oak barrels that once held the distillery’s high-rye Bourbon Whiskey and ferments her sriracha in them for six to twelve months.

With a decade of experience crafting in small batches, Jojo’s Sriracha has established itself as the gold standard in its category. Their sriracha has been featured in the James Beard awarded FoodCurated, on The Cooking Channel and in the documentary, Sriracha.

Founder Jolene (Jojo) Collins says, “I’m learning that great things take time. Over the last two seasons we’ve tested the viability of the bourbon barrels, as well as longer fermentation times. Barrel fermentation feels like the next big step forward for us and we’re really proud of what we’ve made.”

Jojo has also pioneered green sriracha using the famous Pueblo green chile. Made from a combination of in-season Pueblo, Anaheim and Big Jims, it requires at least 6 weeks of fermentation. So inspired by the area and wanting to be nearer to the farmers that grow them, Collins moved her headquarters to Pueblo after years in the Denver Highlands neighborhood.

She produces out of the old cafeteria space of a former middle school in Boone (20 miles east of Pueblo) that serves as a food hub and makers space. The economic revitalization for this part of the state is particularly notable. In June, Jojo’s was awarded the Move the Needle grant for two major pieces of processing equipment from the Colorado Department of Agriculture, aimed at helping to increase local food production. The move to Pueblo, in conjunction with the support from the CDA, has allowed Jojo’s to triple production.

The flagship red sriracha, called the OG, a Good Food Awards 2020 winner, uses vine-ripened red Pueblos, and the entirety of it — skin, seeds and stems — nothing goes to waste. Jojo’s list of ingredients: chili peppers, vinegar, garlic, sea salt and palm sugar, ranks it as one of the cleanest condiments on the market and differentiates it from commodity srirachas.

The limited-edition, limited-run bourbon barrel aged sriracha will be available at Breckenridge Distillery’s retail store and online at jojossriracha.com.