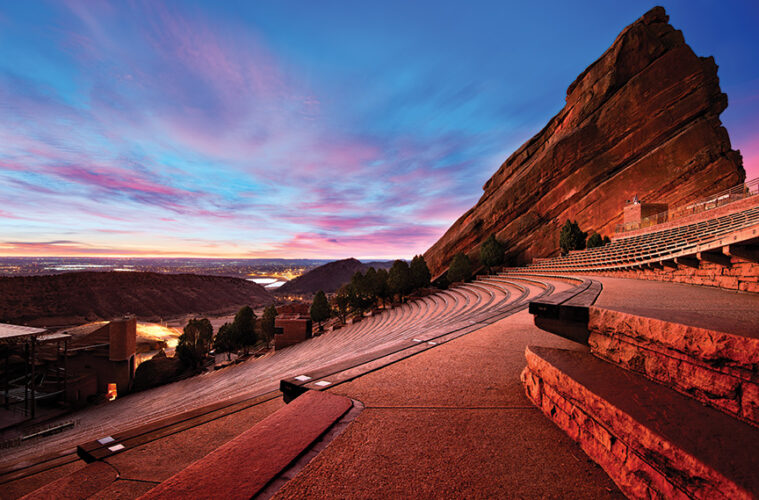 FILM ON THE ROCKS

DENVER – MAY 19, 2022 – Denver Film and Denver Arts & Venues today announced the lineup for the 23rd edition of Film on the Rocks, the annual summer series featuring live performances and beloved films under the stars at the iconic Red Rocks Park & Amphitheatre. Tickets for the five-event season go on sale May 20 at 10 a.m. at denverfilm.org. Tickets are $16 for general admission and $32 for VIP reserved seating. Group sales are also available by contacting Russel Brewer at russel@denverfilm.org.

After two years of drive-in screenings and a limited run of in-amphitheatre events in 2021, the 2022 Film on the Rocks will be a fully in-amphitheatre experience. The season kicks off Monday, June 13 with a presentation of the exhilarating superhero adventure Thor: Ragnarok and continues through Monday, August 15 with a presentation of the six-time Academy Award-winning sci-fi epic Dune. In between, the schedule delivers The Sandlot; The Greatest Showman; and 2022 Academy Award-winner for Best Documentary, Summer of Soul (… Or, When the Revolution Could Not Be Televised).

“We’re incredibly grateful to our audiences who fully embraced the drive-in concept for Film on the Rocks over these past two seasons,” said Denver Film CEO, Kevin Smith. “However, there is nothing more special than the in-amphitheatre experience that Red Rocks delivers and we know that this year’s lineup, packed with some of the most popular films of all time, as well as some new film and documentary additions, is going to create a very memorable summer under the stars.”

Gates open at 6:30 p.m. with musical guests taking the stage at 7 p.m., followed by the film presentation at 8:30 p.m. The full lineup of performers will be announced in the coming weeks.

Imprisoned on the other side of the universe, the mighty Thor (Chris Hemsworth) finds himself in a deadly gladiatorial contest that pits him against the Hulk (Mark Ruffalo), his former ally and fellow Avenger.

Play ball! It’s the early 1960s and 5th-grader Scotty Smalls (Tom Guiry) has just moved into town with his folks (Karen Allen and Denis Leary). Kids call him a dork – he can’t even throw a baseball!

Step right up… and into the spellbinding imagination of a man who set out to reveal that life itself can be the most thrilling show of all.

SUMMER OF SOUL (… OR, WHEN THE REVOLUTION COULD NOT BE TELEVISED)

In 1969, during the same summer as Woodstock, a different music festival took place 100 miles away. Over 300,000 people attended the six-week concert series known as the Harlem Cultural Festival, which provided a vital diversion from the tumultuous chaos of America and celebrated Black history, culture and fashion – then it was largely forgotten.

A mythic and emotionally charged hero’s journey, Dune tells the story of Paul Atreides (Timothée Chalamet), a brilliant and gifted young man born into a great destiny beyond his understanding, who must travel to the most dangerous planet in the universe to ensure the future of his family and his people.