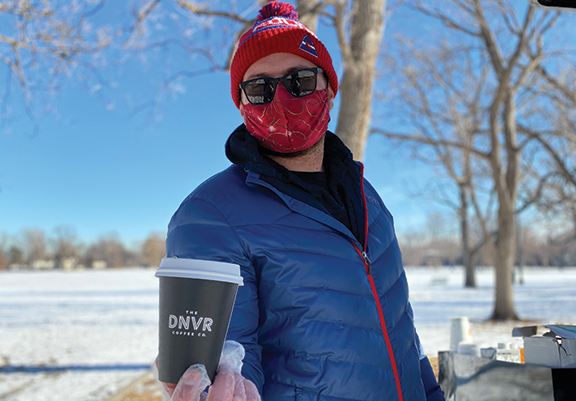 TURNING LEMONS INTO COFFEE WITH BLAKE

Last year put so many of us to test. Challenging? Hell, yes. But for Blake Eatherton it was an opportunity to shift gears and land in an even healthier situation. In April, Blake found himself unemployed in his position as a geologist for an oil and gas company. He didn’t waste a second in finding a new passion project. I think we can collectively agree that this project is one we’re all grateful for. Blake opened DNVR Coffee Company, and has been selling delicious brew from his bicycle-powered cart in Wash Park, so chances are, you’ve already met him.

Before you started serving coffee from a cart you were a geologist. Can you tell us about this evolution?

Yes, I started DCC (the DNVR Coffee Co) in my spare time while working in oil and gas as a geologist. I had wanted to create a business of my own that I could run the way I thought a business ought to. The main goal was to create something that would allow me to pay workers a livable wage from the ground up. It’s one of my core beliefs that if a company cannot afford to pay its workers a wage that can afford them a living in their city then that business should not exist. Coffee carts were the most affordable way for me to accomplish this without accruing debt. When I lost my job at the beginning of the pandemic in March I started making phone calls to apartment complexes, including Country Club Towers, asking if I could pop up in front of their building to serve their residents. It was a hit! I started popping up at apartments around town that would have me and was able to take the business full time and hire a handful of workers.

Did you come up with the design and name for DNVR Coffee Co? We love the aesthetic. What was your inspiration?

I had the design in my head and the name “The Denver Coffee Company” already picked out. I liked the neon sign style lettering and wanted to incorporate it into the logo. When I brought the name and idea to my graphic designers at RoShamBo (based in the Gunnison valley where I studied geology) they brought what was in my head to life and pitched the simplified DNVR Coffee Co which I instantly loved.

DNVR coffee has brought a sense of normalcy to our community, in that you bring coffee straight to us! How has the community received you?

The response has been very positive from the community and park-goers in general. With the occasional exception of cranksters that are probably just having a bad day.

We see you all the time in Wash Park, but what other locations do you serve?

We serve at apartment complexes throughout the city for resident appreciation days especially since Covid has forced many of them to shutdown their in-house espresso machines. Other than that we plan on having two carts at Wash Park every weekend and holiday through the winter, weather permitting. One on the northwest side of Smith Lake and the other near the playground.

When events are no longer a thing of the past, does your cart make guest appearances?

YES! Because I was working full time as a geologist before the pandemic the main revenue stream for the cart was events. It was easy to plan around a work schedule rather than popping up daily. We do events of all shapes and sizes from weddings to corporate parties.

What has been you best experience since you opened the cart?

I think the overall experience of creating something from nothing and helping it grow into a viable business has been an enduring experience. Also creating jobs for a handful of people in the midst of a pandemic has been fulfilling. I couldn’t have done any of it without this crew.

Are you from Denver originally?

I’m actually from Aurora near the Denver border. A few blocks from Yosemite and Colfax.

Being a Denver native (we are a dying breed) what are some of your favorite Denver memories or places?

I loved going downtown as a little kid and going to see “my” street. I assumed everyone had a street named after them until sometime in grade school.

What can we expect from DNVR coffee in the future?

Second cart at Wash Park in 2021! Eventually we’d like to expand into a brick and mortar but with the unpredictability of the last year we don’t have any firm time table.

Not only does Blake make a mean cup of Joe, but he also works tirelessly to ensure his staff is compensated with a livable wage. A feat that sadly, isn’t always prioritized. We respect you Blake and couldn’t be happier for you and this new endeavor.