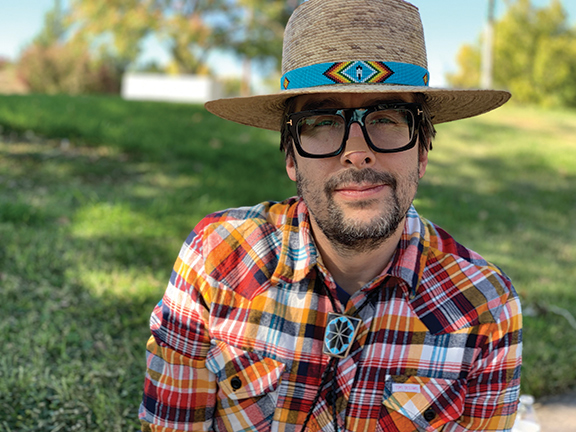 To know us is to know that we are lovers of film to our very core.  We jumped at the chance to interview  our neighbor, Sean JS Jourdan, award-winning screen-writer, director and educator.

It’s not often that we find out our neighbor is an acclaimed writer, director and filmmaker. Can you tell us a bit about your journey and how you started down this path?

In short… I’ve always loved making [stuff] up. In elementary school I was introduced to theatre and movie-making in high school. Science and math have also been an interest – yes, I was a science fair kid – so when it came time to pick a major for college, I chose the “safe” route – chemical engineering, you know, like most kids do. The demands of that major made me set the dramatic stuff aside and, after graduation, I went to work as an environmental engineer. I was living in St. Louis with a good job and a little bit of time on my hands, so I decided to take night classes in drama and film studies at Washington University in St. Louis. Before you know it, I was cast in a play, then eventually accepted into their MA program. Wanting to convey what I had learned in the theatre, particularly the intimacy of a performance – to be a fly in Willy Loman’s living room, for instance – I observed that that could be achieved in film. Even though I had worked with creative collaborators in the theatre, I knew nothing about film. I didn’t even know what an f-stop was… so I went to film school where I earned an MFA. I lived in Chicago at the time and taught at Columbia College Chicago while working as a freelance director and 1st AD. It has been a journey with, thankfully, no end in sight.

You also teach screen-writing and directing at the University of Colorado Denver. How has this role shifted with COVID? Do you anticipate going back in the fall?

Like everyone else I had no idea what was coming but found myself becoming very busy with a number of projects at the end of last year, so I took this past semester off and – wow. We have a couple of children in elementary school (at the time, 3rd grade and Kindergarten) and my wife has a demanding career that requires her full attention during the day – so I’m the backup plan when it comes to the kids. That meant homeschooling, particularly for the Kindergartner. Their teachers really adjusted well on the fly. It wasn’t easy but we did it. Gratefully, we were in a position that I could focus my attention on our children’s learning.

My friends who teach in various film departments tell me it was really rough for everyone. The transition to Zoom, which we also went through with our kids, was daunting. I’ve heard stories of students turning their cameras off so the virtual classroom goes dark… that’s no fun to lecture to. Both screenwriting and directing are taught in a workshop environment so the online lecturing needs to be adjusted to online learning with say, power point, if those tools haven’t been utilized already. A class like directing has its own challenges because you cast actors and go to a location which is prohibitive under our current situation… so the class becomes “directing for non-actors” and your roommates and family get thrown in. Unusual times often require unusual solutions which is oddly, at times, reflective of film-making in the independent world. You have to make it work with what you have.

You were once quoted as saying “Film-making and the world it reveals, is limitless, much like science and imagination.” Where has the art of film making taken you personally? Do you have any new projects on the horizon?

I was just talking to a friend about this. His daughter is in high school and thinking of pursuing film-making. It may not be the most lucrative  but, oh, the adventures! I’ve hung out with various outlaw biker gangs and lived to tell about it. Met and worked with a number of celebrities, collaborated with an Academy Award winner, and I’ve been allowed access to some amazing locations. I’ve had a chance to make things with my best friends and see my imagination come to life. To me, that has tremendous value.

Yes! Always working. As you know, when you work for yourself or with others, there’s rarely a true day off. The “hottest” project I’m working on at the moment is a horror film that is inspired by some true events that happened here, in Colorado, and is also based on our real estate agent’s greatest fear…it’s titled Open House. There’s another project that deals with a single mother, pushed to the edge of the society, and forced to enter into the dangerous world that exists around an event that is very similar to Denver’s very own stock show (which I’m a fan of, btw), and I’m working on a series that we’re developing that is a biographical historical piece – similar in scope, ideally, to something like The Crown. Though I’m always on the lookout for a compelling story.

You’ve had films in many film festivals over the years. What memory stands out most from your experience?

Oh gosh, there’s a few… a night out with German actor, Udo Kier, comes to mind immediately. That was fun. But one that made a deeper impression was an experience at the Ojai International Film Festival. We stayed with a woman whose beautiful home overlooked the Ojai valley and, over the course of the festival, got to know her over a few glasses of wine. We learned that she had recently experienced a terrible tragedy and, in some ways, that experience shaped my first feature film…

Most of your films and shorts are not for the younger crowd. But as a father of two kids under the age of 10, have they been able to see any of your work? What do they think?

I haven’t let my kids see STAR WARS yet, so it will be awhile before they watch mine. I believe film is a very powerful medium, particularly when seen in the theater… when we’ll be able to do that again, who knows? But it can imbed itself in the subconscious and this is particularly true for the kids. They know what I do, vaguely… Dad spends a lot time in his office reading and writing. Our daughter has already shown an affection for making movies and nothing gives my son pleasure like a good puppet show but I try and stay out of the way. If they naturally gravitate towards the dramatic arts, great, but if not, great, too . . . but when fall rolls around I always ask them what they’re doing for the science fair.

Can you give us some insight into your creative process?

It’s funny… you have to live in a strange place between perfectionism and letting go. Writing and rewriting is a very true trope but with every subsequent revision, there’s a lesser return. It’s an inverted logarithmic curve that requires a great deal of effort. Myopia also comes into play. You’re so close to the material it’s hard to be objective and to take objective criticism, that’s part of the gig. I find it’s important to reach out for feedback, everyone has an opinion and suggestions. Some is helpful, some not, so filtering through it, and trusting your gut, is also part of it. It’s not easy but you need to be right more than you’re wrong. At least that’s the wish. But there’s a lot to draw upon. Training and study. A lifetime of reading and experiences. There’s a quote that I have framed on my wall that I read a lot, it expresses what I try to do in a way that I aspire to convey.

Fear is poetry, hope is poetry, love is poetry, hatred is poetry; contempt, jealousy, remorse, admiration, wonder, pity, despair, or madness, are all poetry. Poetry is that fine particle within us that expands, rarifies, refines, raises our whole being: without it ‘man’s life is poor as beast’s.’ … The child is a poet, in fact, when he first plays hide-and-seek, or repeats the story of Jack the Giant-killer; the countryman, when he stops to look at the rainbow; the courtier, who builds his hopes upon a smile; the savage, who paints his idol with blood; the slave, who worships a tyrant, or the tyrant who fancies himself a god.

When you have whatever you’re working on to a place where you can literally not think of another way to improve it,  you’re ready to move on to the next step.

You are originally from New Mexico but now call Denver your home. How did you find yourself here and do you miss the Sandias?

Of course, I miss the Sandias! I’m originally from Albuquerque and my Dad’s family is from Santa Fe. We go back a ways, on both sides. My Stepdad, at the time worked for a car dealership that moved him (and us) to Missouri where I, more or less, grew up and went to undergrad. When family visited us, they couldn’t believe how absolutely verdant it is. But we would always come back to New Mexico for the holidays and, as an undergrad, I had an internship at Los Alamos Labs. So lots of New Mexico time… and food. When my wife and I lived in Chicago she was working for a large marketing firm and when her largest client, based in Denver, offered to make her their Director of Marketing, it was too good of an offer to pass up. Plus, we’d be closer to New Mexico and the familia. Denver is one of the nicest places we’ve ever lived – it combines the best of the west and the best of the Midwest. We consider ourselves very fortunate to be here.

Thank you for taking the time to share with us your craft, Sean. We are always intrigued by creative minds and we can’t wait to watch your upcoming film, Open House. To learn more about Sean JS Jourdan, visit seanjsjourdan.com.