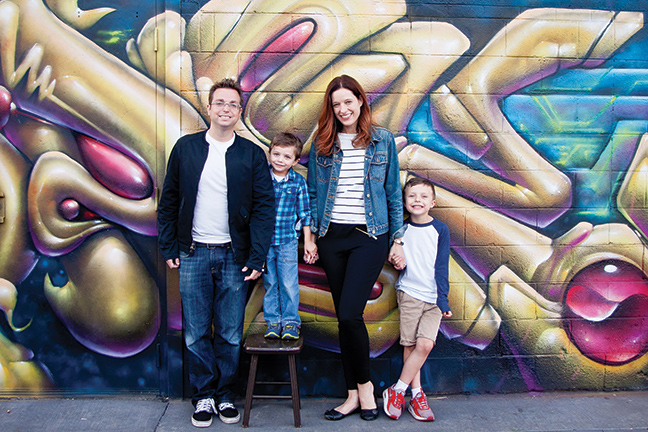 BETTER THAN WE FOUND IT WITH STEVEN WOODROW

Representative, Steven Woodrow is a father, Wash Park neighbor and advocate for social, racial, environmental and economic justice. He’s served for the past several years as Co-Captain of House District 6B for the Denver Dems and is running for Colorado House District 6. Here he graciously gives us a glimpse into his story.

Like many Americans, things weren’t always easy in my house. Growing up outside Detroit, my dad was diagnosed with a terminal heart condition shortly before I was born, and he died when I was just 16 months old. People say I look and talk like him. My mom ultimately went back to teaching and my step-dad sold furniture, but we also had social security survivorship benefits. This taught me at a young age the importance of family, community, and the importance of having a strong social safety net.

I first traveled to Colorado at a young age, and when I was 6 my parents sent me out here to spend a few weeks with my dad’s brother (Danny Woodrow), his wife, (my Aunt Mynde Brown), and my cousins Scott and Alexis. They were the coolest growing up, having met each other at DU. Eventually my Bubbe (Grandmother), another aunt, and my sister all moved here. I love how my family values being involved in our community and practice tikkun olam, the idea in Judaism that we’re here to help repair a broken world.

I attended the University of Michigan and majored in political science. After graduation, I attended law school in Chicago and that is where I reconnected with a childhood crush, Johanna Politzer, who I am proud to not only call my wife but to call my better ¾ (by height!). Just before our first son was born in 2011 we decided to move to Colorado to be closer to family, and I left my law firm to begin my own practice Woodrow & Peluso, LLC in 2015.

We live in Washington park about a block north of the shops on South Gaylord. Johanna runs an interior design practice and since the pandemic set in, we’ve both been working mostly from home. We’re proud Denver Public School parents and are active in the PTA. We’re also members of Temple Emanuel where our youngest son is finishing up preschool.

Before the world recently fell apart, and back before I got into office (when I had such a thing as “free time”), I coached my oldest son’s flag football team at South High School. There’s something so special here in Colorado about our relationship with football as a sport and past-time. Even though my legislative duties had already meant I wasn’t going to be able to coach this season (something that was really hard to come to grips with), it was still difficult when things were canceled due to COVID-19.

We also love camping–having grown up in Michigan and now spent significant time here in Colorado, we are truly blessed with our access to nature. There is just something so centering about getting into the great outdoors. Our sons know that the first rule of camping, even before having fun, is that we leave the campsite better than we found it. Not just as good, but better, so that the next group that comes along can enjoy the opportunities we’ve had.

I just want to say that I know for everyone out there who plays a sport, participates in any activity or league or who loves camping or attending Summer Camp–I know this time is so incredibly difficult and painful. The inability to have these experiences and create these memories means that we must appreciate anew all of the things we didn’t even necessarily realize were gifts at the time.

I’ve also been a big political geek ever since I was a little kid. When I was 12, I gave a presentation to my class on how, given population trends, a candidate could win the popular vote but lose the electoral college. [Note: it’s amazing I ever had a girlfriend.] But after 2016 I became more involved with local politics. I quickly discovered that there were precinct captains and other activists working incredibly hard to organize our community and advance our core values. A position soon opened up, and I had the honor of serving for 3 years as the co-captain of House District 6B. In that role I got to work closely with the District Chair, Captains, and leadership not only to get the vote out in HD6 but to adopt other races around the State as well. As a result HD6 played an integral role in the “Blue Wave” that swept the State in 2018.

I believe in social, racial, environmental, and economic justice. Since winning the vacancy election on Feb. 4th, I’ve had the privilege of voting to protect LGBTQ+ rights as well as the rights of women and workers. I also signed on to co-sponsor the CROWN Act as well as to abolish Colorado’s death penalty.

COVID-19 has of course changed everything. We are now tasked with transitioning to a different kind of normal. Our focus moving forward must be on the foundational needs of our citizens. Secure and stable housing, good paying jobs, clean air, soil, and water, access to healthcare, protecting our schools and small businesses–all of these must take priority as we fight to contain the contagion.

I’m running to keep serving as your HD6 Representative because House District 6 deserves true and sincere representation. I’m here to leave CO better than we found it. HD6 is filled with smart, caring, and resourceful Denverites. It isn’t enough to simply fight for policies that serve the immediate interests of the District at the expense of other parts of the State that potentially need more help. HD6ers are educated and generous, meaning we have to engage in smart, intentional problem-solving.

Regardless of party affiliation or even political participation, I believe there are certain things we can all agree on. Things like we all want good schools for our children, good jobs so that we can provide for our families, and good healthcare so that getting sick doesn’t mean debt and bankruptcy. Most of all I think we can all still agree that the American Dream–the idea that if you work hard and play by the rules you ought to be able to do better than your parents did–is still something worth fighting for.

I represent all of HD6. I am committed to being accessible and present. I host a weekly virtual town hall with leaders of our community and fellow elected officials to discuss pressing issues. Please tune in via Facebook Live and Zoom (I actually received my first Zoom troll just a few days ago!) Overall we’re running a fun and engaging campaign that celebrates our diversity and shared values. We’re grassroots and refuse to take corporate PAC money. We’re a big tent–there’s room for (almost) everyone.

Thank you for fighting the good fight, Steven. We look forward to seeing your name on the ballot this November.