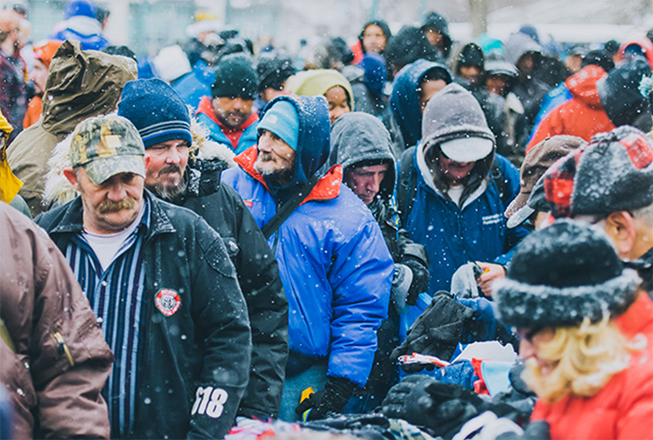 THE ROGUE DISCIPLES THAT FEED THE HUNGRY

It was what he calls the “halftime” of his existence, and Jerry Herships just knew there had to be more to life. He was 40 years old and had recently started attending church again after a decade or so hiatus. His pastor asked Jerry if he had ever considered a career in ministry. “I curse like a sailor, I like brown liquor and I look at the pretty girls when they walk by,” answered Jerry. “I don’t think I’m the guy the church is looking for.” His pastor disagreed. “You might be just what we need.” Five years later, Jerry graduated from Iliff School of Theology, and he has been cursing and drinking and helping the people of Denver while on his quest for something more ever since.

During Jerry’s “first half,” he worked as a bartender and stand-up comedian in L.A. and Orlando. He worked hard and enjoyed success including a stint as a writer for Jay Leno. Jerry has the quick wit and effervescent personality of a showman, and it takes no imagination to flashback to his days on stage making a crowd laugh. He had a successful career and a good life…but it wasn’t enough. “There’s gotta be something else,” Jerry remembers thinking.

I met Jerry a couple of years ago, a decade into his “second half.” We were in Civic Center Park handing out about a hundred lunches to a hungry and grateful throng of our homeless neighbors. The crowd was lined up and well behaved. Jerry and his guests had done this before and they knew the routine. I was there to help once, and it felt pretty good. Think how it must feel to Jerry. He and his team of volunteers serve lunch in Civic Center Park every single day.

Jerry is an ordained Methodist minister. Fresh out of seminary, he served in a suburban mega-church called St. Andrews United Methodist in Highlands Ranch. There he preached to thousands of members at one or more of the many services that are held at various times across a Sunday. For the entertainer, standing in front of an audience and putting on a show must have made him feel right at home. But Jerry gave it all up to try something new. He traded the sanctuary for a tavern, the pulpit for a barstool and his massive congregation for about 40 “regulars.” Jerry formed a loosely defined church named After Hours. It might sound like an excuse to drink – it might actually be an excuse to drink – but it is a real thing. He even gave me his business card. It is a drink coaster with contact information printed on it.

The tag line on Jerry’s business coaster says, “Love More, Laugh More, Judge Less,” and that pretty much sums it up. His regulars include Jews, Buddhists, atheists, agnostics and Christians. They don’t get hung-up on what separates them. Their mission is to feed the hungry, and they don’t care what religion or lack of religion brings them together to achieve that goal. They meet on Monday nights in a bar. They make peanut butter and jelly sandwiches to be handed out to the homeless, Jerry talks for a while, the regulars talk for a while, they pay their bar tab and leave.

The rogue disciples from After Hours distribute their lunches on Tuesdays, and their leadership team coordinates the volunteer schedule for the rest of the week to ensure lunch is served every single day. I expected to hear of other Denver area churches on the lunch rotation, and I was not disappointed. What I did not expect to hear was that also occupying a spot on the weekly or monthly lunch distribution roster was a law firm, an equipment manufacturing company, a sorority, a mergers and acquisitions firm and a neighborhood group. Jerry absolutely believes they are all doing the work of God, but the effort is both all inclusive and overwhelming. The faith of the homeless and hungry lunch recipients is not important. Nor is the belief system of the volunteers. Jerry might be feeding the hungry because God wants him to do so. He doesn’t care why his volunteers are doing it. He just wants them to keep the lunches coming because the need is enormous and growing.

Jerry told me we have roughly 5,500 homeless neighbors in Denver. Lack of affordable housing is the number one issue causing homelessness, while drugs and alcohol, mental illness and lack of affordable healthcare are major factors as well. The Colorado Coalition for the Homeless reports that last year 232 homeless people died in Denver. That number is up considerably from previous years and shows no signs of receding. Jerry is less interested in the statistics than he is in listening to the tragic tales of his neighbors in need.

Jerry shared with me countless stories of people he has met on the streets with full-time minimum-wage jobs who cannot afford a one-bedroom apartment in Denver. He has friends who had good jobs and a place to live until they got sick or suffered a medical emergency that left them with five and six figure medical bills they could not pay resulting in eviction and job loss. Consider the number of Americans who are just scraping by without any saving or healthcare, and the difference between having a job, food, clothing and shelter and being on the street fighting for survival is one missed step on an icy sidewalk or another hike in rent because of our population explosion.

I asked Jerry why Civic Center Park is home to so many of Denver’s homeless population rather than Wash Park, Cheesman Park, City Park, etc. I assumed the neighbors in those residential parks just shouted at the city louder than the businesses and residents downtown, and Jerry conceded that I was right in part. But again, Jerry knows our homeless neighbors and he understands their daily challenges. He explained that in order for someone to survive on the streets, he must know what services are available where and when. Meals, showers, snacks and shelter are all offered at various times by various organizations – mostly downtown. A central location like Civic Center Park is a key to survival for our neighbors living on the streets.

Jerry knows the cops, the folks at Denver Parks and Rec., and many of the city officials, too. There are a lot of good people doing what they can to reduce the number of people suffering without a home, and to help the homeless to survive in the mean time. The problem is complex and growing. Jerry explains that there is no simple solution. The churches need to do more, the government needs to do more, the residents need to do more and businesses need to do more, too.

I had the chance to feel the magnitude of the need this past December 25th as part of the team of 600 volunteers that Jerry and After Hours assembled to host their 10th annual Christmas in the Park event. Churches and businesses and neighborhood groups came together to provide food, warm clothes, toiletries, backpacks, boots, winter coats, and other essentials to between 700 and 800 grateful recipients.

My family and I volunteered at the backpacks station. We helped our homeless neighbors choose from a wide variety of backpacks, rolling suitcases and duffel bags to find a way to protect all of their belongings as they fought for survival. I was not prepared for the conversations I had. One woman asked if we had any children’s backpacks. My initial reaction was that she must have some mental illness, some derangement. She explained that a children’s backpack was far less likely to be stolen from her on the streets. Another man visited our station when our supplies were running low. He was desperate to find a large backpack to secure his belongings. I suggested an old-school garment bag because it was large. He looked at me with a dismissive smirk and said, “Sir…I don’t have any garments.”

Our neighbors who searched through piles of donated bags and backpacks were not shopping with fashion in mind. They weren’t looking for a bag to match their shoes, and the name brands on the tags were the furthest things from their minds. Their eyes were desperate and pleading. They knew what they needed – not to look good or match their motif – but to stay alive for the next few weeks. That is a look with which I was unfamiliar. The disappointment when we ran out of backpacks, while the line still stretched on to the edge of the park, was felt by the volunteers and the homeless people alike. It left those desperate for survival feeling hopeless, and those of us who fell short on our effort to help feeling empty as well.

I am proud that we tried. I am proud that we helped and made a difference. But I am haunted by the looks of pleading desperation on the faces of those we left behind on that cold Christmas day as we returned to our warm Wash Park houses to continue our festive celebrations. I am glad to have joined Jerry’s team and to have made an effort. I am even more determined to do more next year. It is neither a good nor bad feeling. The feeling it left me with is one of being in touch with reality – not of understanding the situation from an intellectual level – but of joining with my brothers and sisters of all faiths and backgrounds and economic status and races and ages to love our neighbors who needed the love the most. It is a feeling that I hope will never subside just as I know it will never be satisfied.

We all want to help. We get caught up in our busy lives, and we don’t have time to spare. We write checks to help ease the guilt. But when we get involved – take action in spirit AND in body – when we look desperation and need in the eyes – the result is powerful. We aren’t just helping our struggling neighbors. We are changing our own lives forever.

For more information about Jerry Herships and After Hours go to afterhoursdenver.org.