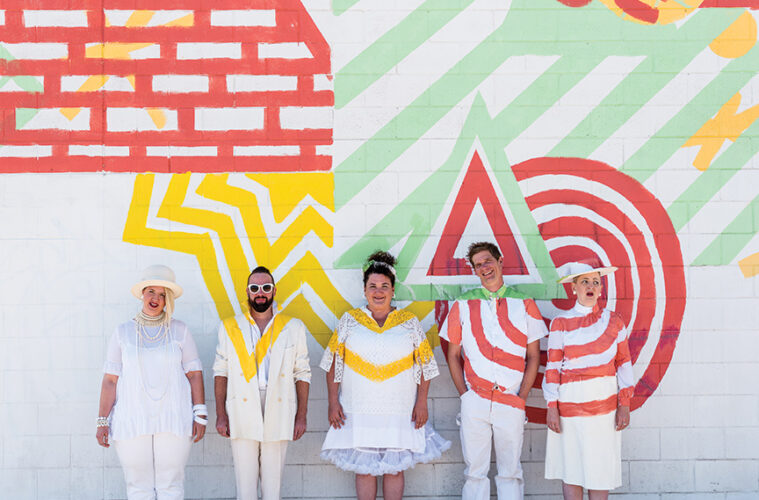 I am going to say something controversial. Theater is boring. My dad describes opera in a way that I think embodies my feeling about theater: it’s a really expensive and uncomfortable nap.  I don’t even want to be awake past 8:30 pm, which makes most productions of basically anything on a stage feel like a major imposition. I don’t like things standing between me and the Land of Sleepy-Sleepy.

I don’t like intermissions. It’s just more extra time layered in that’s keeping me at a boring theater and not sleeping in my bed.

I don’t like theater snacks or theater drinks. I shouldn’t need to explain that to anyone. No one likes them. They’re just an affront to snack foods.

But there is an exception to all that sucks about the theater. That exception is Buntport Theater and it was made for people exactly like me who think theater is really boring.

Why does Buntport not suck?

1) Almost all their plays are funny.

2) All their plays are originals. They don’t need to steal anyone else’s cool plays. They write their own cool plays. They wrote Kafka on Ice. Okay? You just imagine what that was like. It’s just what you thought. It’s a play on an ice rink.

3) They’re informal and casual and once I watched a play from my car eating my own good snacks.

4) They are really effing good actors. I mean really, really good. And I hated Good Will Hunting because I thought the acting sucked, so my standards have often been called “unreasonable,” or “ridiculous.”

5) It’s reasonably priced. Because theater used to be for everyone, like 500 years ago. Buntport is bringing it back to the people.

6) They have a play that I can relate to personally called Middle Aged People Sitting in Boxes, which as they say, barely needs to be described because the entire show is perfectly encapsulated in the title.

Though, I personally only like Hamilton and Buntport Theater, I do recognize the importance of theater to our communities. And in that spirit, I would encourage you to go to Hamilton, and also and more importantly, go check out your local geniuses at Buntport Theater Company. And then make an extra donation. They work their arses off to keep their prices low to keep theater accessible to all. They struggled and persevered through the pandemic and they’re still throwing out brilliant theater, so if you see them, make sure you give an extra gift to show your appreciation to them… for making you not hate theater anymore.