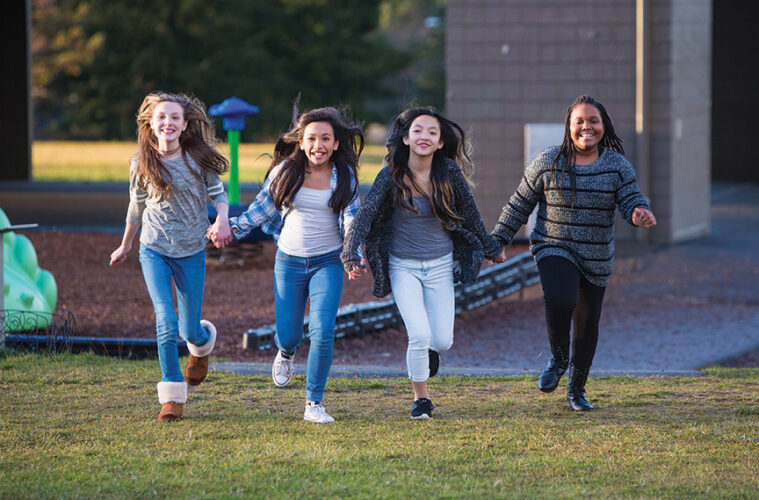 There is a place where middle school girls can run, scream, dance and crab-walk through the hallways between classes. A place where math is taught in action with things like the “fraction dance” and where girls are encouraged to be bold, honest and authentic. It’s kind of the opposite of the middle school experience that most people endured and barely survived.

My history with GALS (Girls Athletic Leadership Schools), is long. I was a founding board member, so I am more than a bit biased toward the pedagogy, curriculum, vision, mission. What enticed me to hop on board at the time when we didn’t know 1) what the school would be, 2) where the school would be, 3) who it would serve…with so many unknowns the one sure bet were the founders, Liz Wolfson and Nina Safane.

Liz and Nina are former athletes who both shared a passion for education and movement. The two of them are so badass that basically, you feel like a badass just being in their orbits. They are women who care about other women and want to see all of us succeed.

When GALS launched, it did so from a church on University Blvd. It wasn’t fancy, it wasn’t like having our own building, but it was a start. We just needed a home for these girls where they could run, jump, and learn.

And it grew. The classes were full, we needed more room and people were talking. Our little baby school was growing. We moved to Galapago Street. We had a high school now and the program was really working. It turns out that having students move really does allow them to learn more fully and in a comfortable, hospitable environment. The research was real and GALS became a living lab to reinforce the philosophy. Movement not only creates joy, energy, and confidence, but also promotes memory, attention, and cognition.

Parents were happy, saying things like: “my daughter has greater self-agency,” or “my daughter loves going to school every day.”

Watching GALS grow has been a gift. The girls come out stronger, bolder, and ready for the real world. It’s an inspiration just to walk through the building.

And now, as Liz and Nina continue kicking immense amounts of ass working with female athletes nationwide and working in philanthropy, the school is under the leadership of Carol Bowar who is continuing to form these lifelong learners through self-expression and mind-body development.

If you want to learn more about GALS, or if you want to join the movement, check them out at www.galsdenver.org.