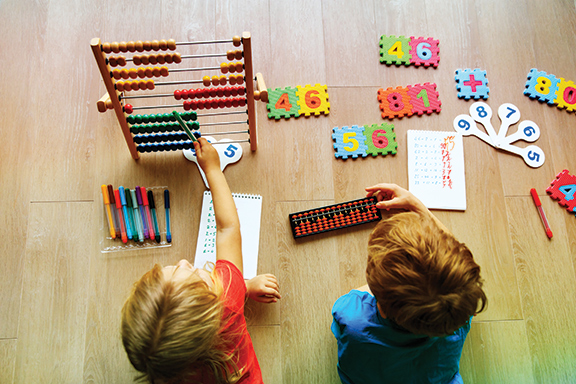 IMPROVE YOUR CHILD’S CONFIDENCE TO LEARN

When you hear the word “math” do you instantly relate it to feelings of dread? Why does the subject have such negative connotations? Math does require a certain capacity for abstract thinking, and everyone learns at their own pace. But we’d love to see a shift, where people feel more confidant in Math, as it will help them with so many other aspects of their lives. And the best way to shift this thinking is to change the narrative while with our kids and start them down the right path at an early age.

Learning difficult math skills improves your children’s confidence in their ability to learn any difficult skill as well as their ability to problem-solve in life. Feeling confident means you believe you are capable of doing something. Children who have experienced learning challenging math skills approach other learning with confidence. Confident learners have an advantage over insecure learners.

How Does this Happen?

Learning a difficult math skill, whether it is long division  or calculus, gives children a personal connection to the saying “hard work pays off.” Overcoming a challenge, whether in math, sports or in music, requires a special blend of motivation, courage, grit, and a growth mindset.

The Special Blend for Overcoming a Learning Challenge and Increasing Confidence

1. Motivation – Motivating children is tricky. You want kids to feel intrinsically motivated, but they need some positive experiences for them to become motivated. If they are completely unmotivated in math, or in learning in general, a small extrinsic motivator might help. Small rewards entice kids to try an activity when they refuse to do it otherwise.

2. Courage – Repeatedly feeling like a “failure at learning” would make anyone feel insecure. Children with learning disabilities, like dyscalculia, often feel insecure or “dumb,” because they learn differently than others. Before these children experience a learning success, they usually must muster up the courage to accept help. If this describes your child, understand how to show empathy without excusing poor performance. Support your child in building the courage necessary to accept help.

3. Grit – The term “grit” describes a person who puts forth consistent effort and follow-through towards a goal. Angela Duckworth, math educator, psychologist, and author used the term after observing what made a successful algebra student, successful. IQ seemed to have little bearing on success. As an algebra teacher, she noticed that students’ success in her class had more to do with their habits than any natural math aptitude or brilliance. Successful students in her algebra class had consistent work habits. They didn’t give up when they had a setback. She called this habit “grit.”

In her Ted Talk, Duckworth states “Grit is passion and perseverance for very long term goals. Grit is having stamina. Grit is sticking with your goals, day in, day out, not just for the week, not just for the month, but for years, and working really hard to make that future into a reality.”

Succeeding in any challenging activity takes stamina. Even if elementary school children don’t verbalize the goal of wanting to one day take advanced math, that is when preparation for math goals should start. The younger children are when they to develop “gritty” math habits like asking questions, focused study habits, and consistent practice, the more successful they will be.

What’s worse, students and some educators get too focused on getting the correct answer to math drills. They forget that math can be a creative and joyous pursuit. Practicing arithmetic procedures should be like sports drills. They are helpful in isolating certain skills, but not a substitute for playing the game. Imagine if a basketball team only did passing drills and never played an actual game. Kids and coaches would get bored and think basketball is boring. This tragedy is happening throughout classrooms across the United States and the result is kids thinking math is boring.

Carol Dweck, a research psychologist at Stanford University wrote a book about the importance of mindset called Mindset: The New Psychology of Success and it is revolutionizing the way people think about learning. A fixed mindset is when people believe ability or talent is unchangeable – someone is either good with numbers, or not good with numbers. A growth mindset is the belief that intelligence is influenced by exercising our brain.

Jo Boaler, a well-respected math educator explains in her book, Mathematical Mindsets: Unleashing Students’ Potential Through Creative Math, Inspiring Messages, and Innovative Teaching how historically math instruction in the United States has been especially plagued by a fixed mindset instead of a growth mindset, even by math instructors. Math instructors with a fixed mindset are more likely to let learning deficits fester. Instead of only valuing right answers, math instructors with a growth mindset value effort, process, progress, work, and even mistakes. When people work harder, they get smarter. In fact, their brain grows!

Don’t fret if you, your child, or your child’s teacher has not yet fully embraced the idea of a growth mindset. It is a process. The first step is to acknowledge where you are in the process. When math teachers see the dramatic improvements and achievements of children in a growth mindset setting, they begin to adopt some of the growth mindset principles. Amazing successes are possible with this paradigm shift. Classrooms plagued by learning deficits have risen to the top of their state in math scores.

After having the motivation and courage to put forth effort, children must sustain this effort for months. This sustained effort is called perseverance or “grit.” They must also embrace mistakes and setbacks as part of the learning process and development of their mindset.

How Does Mathnasium Increase Confidence in a Child’s Ability to Learn?