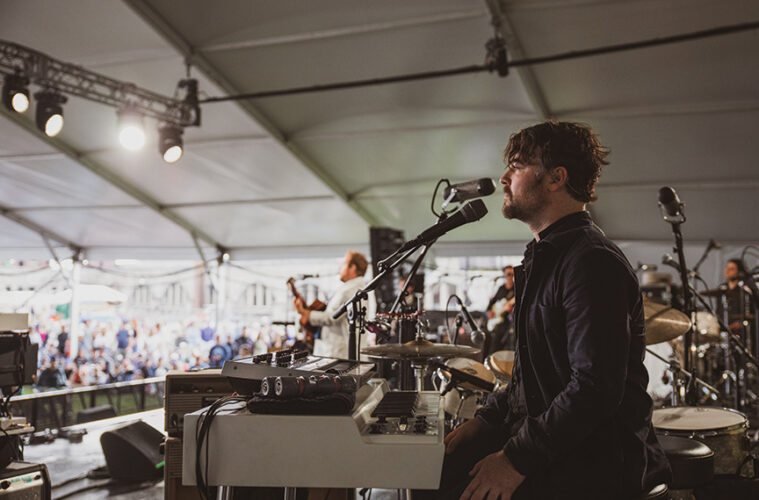 If you’ve been following the Denver music, there’s a very good chance you’ve heard the name Patrick Meese. He is the drummer for Nathaniel Rateliff, but has taken a deeper dive into nurturing his solo project, The Centennial. It all began at a house party during the Underground Music Festival, but Meese’s recent five song release Buried Gold underlines his talent as a veteran musician. We feel lucky to have had the chance to catch up with him to discuss this beautiful project he created and to learn more about where he’s headed. 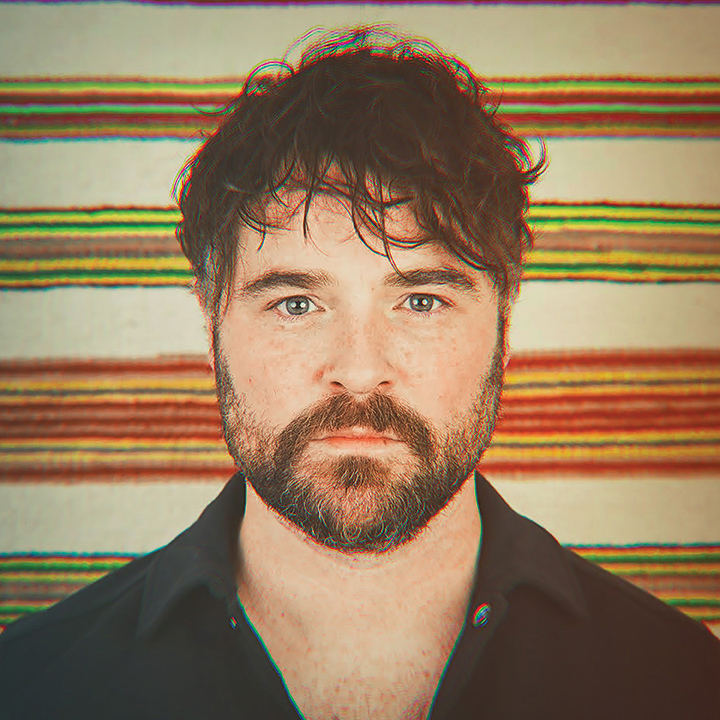 You’re no stranger to the music scene. Before venturing down this solo road, you made a name for yourself working with the likes of Nathaniel Rateliff, Tennis and Gregory Alan Isakov. Can you share with us a little about your musical journey since moving to Colorado two decades ago?

When I look back I can say it’s been an absolute pleasure. I’m still friends with people I first started playing music with here. Denver was great for me because of the size and how tight-knit our scene was even if the styles were different. I always felt like I had someone helping me out. Sure there were growing pains. No scene can get better without criticism and without having failure along the way. I just kept trying to move forward and I’ve gotten to play music with some exceptional people.

It’s been 10 years since The Centennial’s last recordings. Why did you take such a long break and what inspired you to revitalize this project?

The break wasn’t intentional. Around 2009-10 I was fortunate to find plenty of work hopping on smaller tours, one of those being with Nathaniel in his “folk” days. I clocked a lot of van hours. I also tried to up my producer work around that time, writing music for commercials or helping to produce local artists. Then the Night Sweats happened and it required much more of my time. But I always had The Centennial on the back burner and I kept writing for it whenever I could. 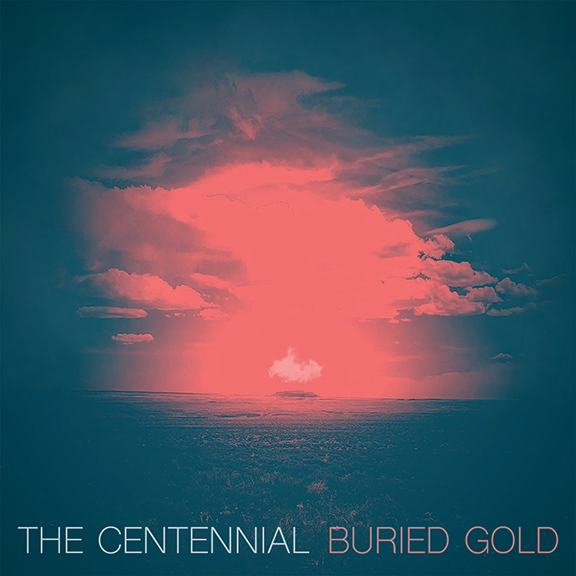 Buried Gold, your new five song release, is what happens when you make the best out of a bad situation. Can you tell us about your process in creating this during the pandemic?

Like a lot of people, I found myself with more time on my hands than I’d ever had before. I have a studio at my house and I saw window of opportunity to breathe some life into the project. It also was a nice way to focus my energy away from the scary ass situation we were particularly in Spring 2020. I got to work right away and spent those first months of the pandemic going though old song ideas and tracking a great deal.

The new EP “Buried Gold” has such an expansive sound. How would you describe it and where did you find the inspiration for these songs?

I’ve always been drawn to spacious and dramatic sounding records. It might have started growing up listening to brit-pop and spacier stuff. Then I met Richard Swift and his bx-10 verb tank and that put a new spin on it. I wanted to use Buried Gold as a chance to get out all the musical and production ideas I had been storing over the last 10 years. I also just learned so much about production and recording over that time. Also, these song have a tie to the West and big open spaces, so it seemed fitting to make them sound huge at times.

You recorded Buried Gold in your home studio. What was your process like? For all of us home recording enthusiasts, what tips and tricks do you consider to be essential?

It was a lot of late nights. And a lot of merging ideas and trying not to overthink. Sometimes you have to force the inspiration. I think it’s always there if you’re willing to dig for it. But the longer I’ve been working as a musician the harder it can be get motivated. There can be moments when I feel like I can’t wait to work followed by days I feel like I’ll never be creative again. 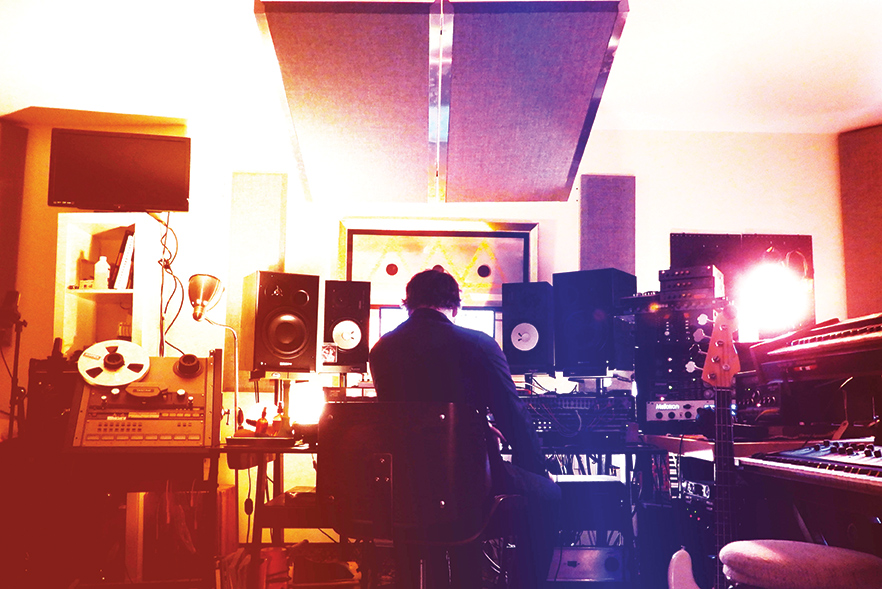 You teamed with LA-based artist Ben Radatz and New York-based artist Brian Alfred to create five really cool lyric videos for the release. What was the inspiration and concept behind these videos?

I grew up in Ohio and moved out here 20 years ago for school. I never really considered myself in love with “The West” but that has changed at this stage in my life. I love it here and the more I explore this part of the country the more grateful I am to have ended up in a place that has so much to offer a person willing to explore. Ben and I got connected through my management and each of us had gotten back from road trips in the Southwest. He is a midwesterner as well and we ran with the lyric video idea. He looped in Brian for the minimalistic imagery that I’ve always been drawn to and I couldn’t be more pleased with how the videos turned out. They are two very talented guys.

As a veteran of the Denver music scene how would you assess its current state as well as its future?

As a guy that’s been around awhile I have to say it’s nice to see a lot of my friends from the years I got started still releasing great music and playing locally. I admittedly don’t go to as many shows as I used (especially recently) but there are a few local acts that have popped up on my radar. Gabriel Albelo is one I’ve been listening to. He is opening for my good friends Blue Rider at the Hi-Dive 10.29. Also, my Night Sweats brethren and I now own the Skylark on South Broadway and hope to use the upstairs as a small venue. I would love to get new local acts there.

Will you be performing live as The Centennial?

I would love to! Do you know where I can find a band? Kidding. Someday but probably not for a bit. Maybe something solo once I get a chance.

The pandemic has reset how musicians are moving forward in the music industry. How has this affected you and where do you hope to take your musical journey in the future?

I just got back from a NRNS tour and it feels like things are creeping towards normal (despite the vaccine card check and smaller crowds). We’ll see what the winter has in store for everyone once shows move mostly indoors. We’ve scaled back our original Night Sweats tour plan for now. I plan on making the most of my home time and getting back in the studio to work on new Centennial music. “Buried Gold” feels like I’ve laid a base I can build on now.

Though Meese will undoubtedly swing back into action with The Night Sweats, he’s vowed to continue developing future work for The Centennial. To learn more and listen, visit thecentennial.net. Thank you so much, Patrick, it’s been a pleasure to learn more about your process and craft. We can’t wait to see  you on stage soon.