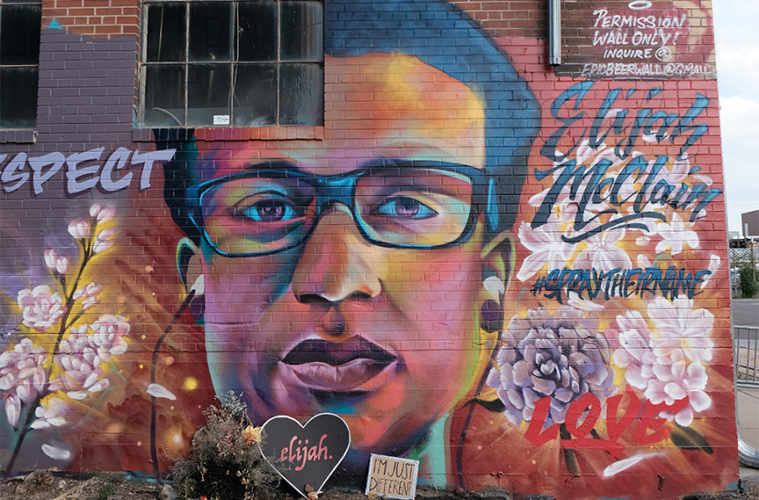 By now you have probably heard of the art movement “Spray Their Name.” Started by local artist Thomas Evans known more commonly as detour303, and Hiero Veiga, this duo is traveling nationwide to paint murals focused on black and brown victims of police brutality. They are giving not only a voice, but an honor to the oppressed and silenced. We were privileged to have an opportunity to interview Hiero Veiga about his recent collaborations that have breathed hope and life to our city during a time of deep heartache. 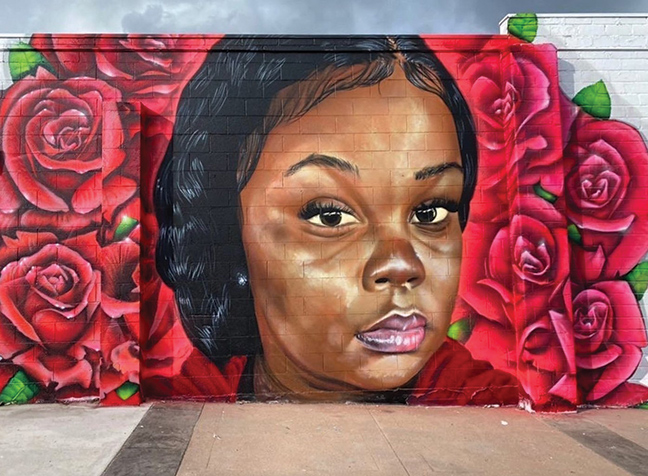 Your art was featured at the opening exhibit for the ILA gallery right before COVID. They also show the work of Thomas Evans (detour303). Is this how the two of you first became acquainted?

We first got acquainted right before CRUSH walls in 2019. We are planning a major collaboration again this year but we haven’t decided what direction we will take yet. Things change with the drop of a hat. We spoke today about how we’d like to be involved in each other’s lives and projects as much as we can. Even if he’s a lead and I’m a hand. And Vise versa. Like today, he literally helped me paint some background stuff just to push it out. That’s just the kind of person he is. He’s always thinking about everybody else and he just loves putting paint on the wall. Our relationship is just effortless. It’s weird because we haven’t spent much time together and the time we do spend together is always painting, so there’s not a lot of dialogue. We haven’t had much dialogue, but we don’t really need to. We know what we need to do and it just works. He’s good at what he does, I’m good at what I do and when we get to the wall, we both know what we need to do and the project speaks for itself. It is a little sad and it does bother me that the way we’re doing it and what we’re doing is why it is working even more. But I understand the responsibility of what we do. On top of amplifying these faces and using our platforms to push them out, we’re giving people an opportunity to really just decompress and heal. Instead of ingesting that trauma, we are putting it back into a different space. People come to these walls crying, they leave messages and notes and candles, they hug each other.

In the past you’ve been quoted that you’re less interested in the impact of your art, and more interested in the person or subject of your portraits. But the entire mission of Spray Your Name is to uplift the voices of the oppressed, and also of those whose lives were stolen. So obviously your art is going to have a huge impact in immortalizing these people we need to know and remember. I guess what I want to know is, what positive changes have you seen from these inspirational murals around our city?

I’d say, healing. People get this opportunity to heal. You get to watch black people die on tv and social media all the time and it becomes normalized. It becomes part of your reality, and you swipe past it like you would a meme. Painting these faces, brings them to life. You get this opportunity to see them in a way you’d see anyone else, like a real person. It’s not something you can swipe past. It’s a monument now, and something you can pay tribute to. From what I’ve seen from these walls, I’ve seen people expelling, so to speak. 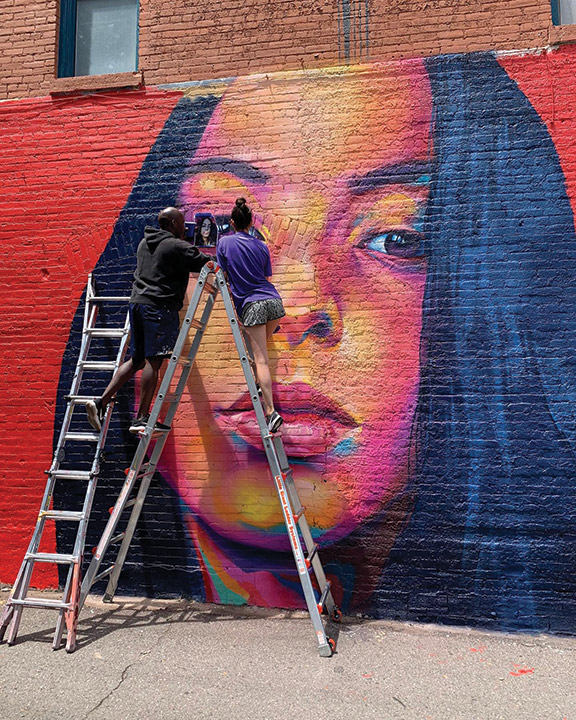 Our governor Jared Polis announced that he’d be appointing a special prosecutor to investigate the death of Elijah McClain. This is a huge step forward, since the DA was dragging their feet a few weeks ago. I’d like to think that your mural had some part in pushing this forward. What do you think?

I can’t say it was just me. Thomas and I talked about it today. The mural got a bunch of attention and everything, but this was already on peoples’ minds. Everybody was thinking this, all we did was paint that boy’s face. People sharing it and amplifying it helped bring awareness.

I know you’re originally from Boston, but based in Miami. Yet you obviously have deep connections in Denver. How did you find yourself here?

I’m a graffiti artist, I grew up a graffiti artist. Graffiti tied me to everything. No one really knew I was a black artist, or a black graffiti artist for a long time because I always hid, like most graffiti writers do. I would refuse any pictures of myself painting, interviews etc. So last year, I started showing face right before Crush. People started to catch wind of that and Thomas was one of them.

Are you glad to be more up front and center?

Yes, and no. If I’m being completely honest. It’s cool to be recognized as an artist. But now, I’m recognized as a black artist, and that’s a weird thing at times. My friends that are girls that paint, I tell them be good enough as a painter as an artist, don’t be good enough as a girl artist. I feel the same thing as being a black artist. Don’t get me wrong, I have pride in who I am, but I want to be good as an artist, not just a black artist. It can feel almost like a secondary title at times. Keeping the ambiguity and hiding in the shadows, allowed me to move at times more freely. I wasn’t pigeon-holed and I didn’t have to paint a certain style or certain thing. If you saw my work you couldn’t tell other than I was inspired and I wanted to paint. It shouldn’t matter that I’m black but it does. It is a duty and I have to have a voice right now. And I believe in this. That’s one thing that I understand between Thomas and I. We have this duty. We are the most capable right now, so why not.

This is taking it back to the beginning again, but when did you decide you wanted to be an artist? Did you have formal training, or are you one of those self-taught geniuses? 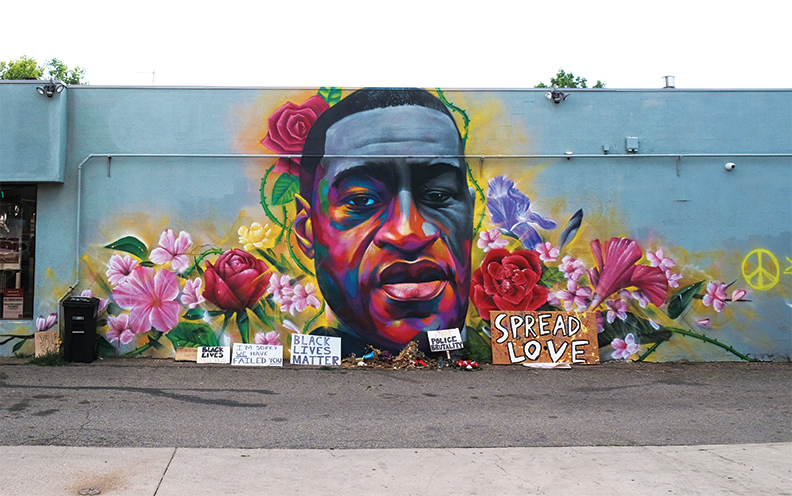 I really can’t even comprehend your work, it’s magic. My brain can’t wrap around how you achieve such realistic portraits with spray paint. Can you give us a glimpse into your craft? How has your work evolved over the years? Have you always been drawn to realism and portraits?

Yes. They, in the last couple of years, have become more visceral. I have started to understand what I’m putting into these portraits outside of paint. In the last couple of years I’ve done more backend work like shooting more lighting to pull out certain tones; or, having certain conversations to inspire someone to make certain expressions so I can pull out certain features. The thing that draws you in is the thing that I practice working on. It’s something I can’t explain, I understand this and I capitalize on this.

You say you get lost in the spaces in between your thoughts. Can you tell me more about this?

It’s hard to explain. It’s like when you’re doing something you love so much and you zone out and you realize you just did this thing. I practice on being in a higher form of consciousness…that’s my space. What I’m trained to do is go to that space. You’re so far connected to the work that you’re in the stream of it. It’s like a high. It’s like my third eye opens up and I’m seeing with a different sense.

You recently collaborated with Anthony Garcia of Birdseed Collective on a mural of Chata. I have to say, I’m not aware of who she is. Can you enlighten me?

She’s an amazing person, and she practices Aztec dance at Anthony’s place in Globeville. He grew up in that neighborhood all his life. There are a lot of people in that community who grew up there and are still there now. I wanted to paint her there because of the neighborhood, and because of what it meant to them and their culture. I shot almost everyone in that entire group and I think it’s a group of 30. There are not many of them and they’re keeping a very small aspect of their culture alive that not many people still participate in and there’s not a lot of information on them. I think it is amazing to watch and it’s beautiful and crazy that this art is so old and they are still doing it. I feel like painting the right people within the community enriches the community. I’ve always thought that public art should reflect the people from where the art lives in and if it doesn’t then it doesn’t make sense to put the art there, at least as far as what I do.

Words can’t express our gratitude for your generosity and your gift of art. You have given us a chance to expel our emotions. We are forever in your debt, Hiero. Please see his extensive portfolio at instagram.com/hieroveiga