“It’s rare to find dream-pop that resolves with such assured optimism, in which you can sense experience shifting into its proper place… Kramies seems to have mastered the talent of simply breathing it into shape” – Misfit City

Have you ever stopped to wonder who you’re actually rubbing elbows with around the neighborhood, the park, Starbucks or Safeway? Well you might be surprised. That’s how we felt after meeting Kramies, the alternative musician and Hidden Shoal recording artist from Wash Park who is beginning to develop a committed following in Europe. It was only a few days after having coffee with him that we ran into him again at Safeway. It was clear, we’ve probably crossed paths time and time again, never realizing that right in front of our faces was this amazing artist who has been cherished for his “crushingly beautiful music” halfway across the planet. His music has a voice in Europe, so it’s about time that our own city, and the people who live in Kramies’ backyard, take notice. 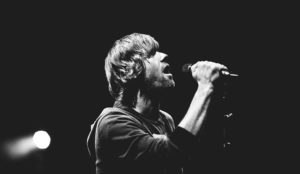 Kramies is a Dutch-American singer-songwriter who has been honing his craft ever since he was a kid when his parents gave him a guitar instead of a science kit. His masterful songwriting fuses electronics and atmospherics creating a style that is considered haunting and romantic.

In 2011 Kramies signed with Australia’s Hidden Shoal Recordings and released, to much critical acclaim, The European EP.  In 2013 he teamed up with Jason Lytle of Grandaddy and Todd Tobias to record his much anticipated new EP “The Wooden Heart”, which has gone on to receive many awards including EP of the Year, Song of the Year, BBC top 10, and more. In 2015 after many glowing international reviews, Kramies teamed up once again with producer Lytle to release “The Fate That Never Favored Us.” The single was named “Song of the Day” by French music magazine ‘Les Inrockuptibles.’ In the Spring of 2015 he left the States for a tour in France. There he played a sold out show at the famous Le Grand Théâtre which led to the release of his “forêts antiques” live EP. The record was listed as Top Albums of 2015 by Paris magazine ‘Pop Cultures & Co.’

We recently caught up with Kramies who is currently writing and recording his new album. 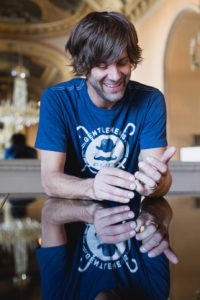 When did you move to Wash Park?

I moved here back in the Autumn of 2011. When my wife and I first moved here we lived in West Wash Park, our apartment was a tiny 460 sq. ft. After a year we moved to a beautiful spot in Wash Park and have stayed ever since. This is honestly one of my favorite spots in Denver. It has a very pleasant neighborhood feel and there are so many cool places within walking distance. Wash Park also has an abundance of nature, which helps me with my creative process.

What do you think of the Denver music scene?

I’m still very new to the Denver music scene. In my life I’ve never really lived anywhere long enough to have the opportunity to explore or be a part of a local scene. I’ve always just focused on putting music into this world that hopefully effects a few people in a positive way. Denver, has been the place I’ve lived the longest, so I’ve slowly been able to see some great songwriters. The talent here is really amazing and unique. Songwriters like Joe Sampson and Anthony Ruptak have the ability to captivate anyone who hears their music. I have also noticed that Denver audiences are wonderful and dedicated music supporters. Additionally there’s great concert organizers like Mountain to Sound who put on some wonderful and unique shows. 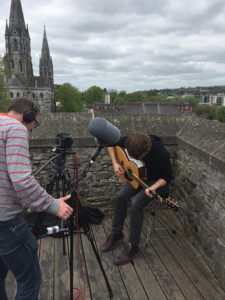 What was it like to play on a bill with Nathaniel Rateliff?

It was really cool to be invited as a guest! It happened thanks to my friend Joe Sampson who a lot of people in Denver already know. Joe and I met about a year ago and became label mates on Australia’s Hidden Shoal. He asked me to sing with him on a few songs. I jumped at the chance because I love Joe’s music and Nathaniel is amazing. Being so new to the Denver scene, it was a wonderful opportunity. The show was for a really good cause by Project Worthmore, which made it a perfect night. I’ve been pretty lucky in my career to play some big shows, but being asked to perform with friends for a great cause makes everything more special!

When you were younger, you played in many bands and were on the road a lot which obviously meant, every night was a party. Can you tell us a little about your sobriety? How has this liberated your experience as an artist?

Getting sober was and will always be the biggest accomp-lishment in my life. Before that I was just spinning in circles. I always wanted to be an artist and music seemed to fill that desire for me at a young age. I was a shy kid, a kind of happy loner, until I got a bit older and discovered the whole band and drug world.

Unfortunately, I wasn’t the type who can party and walk away. So, in 2004 I got sober and told myself I would do anything I could to live the life of an artist and somehow create things that would hopefully put a little love back into this world, no matter who might be listening. Sobriety has given me that opportunity as well as the focus, energy and clarity to keep creating.

You were just in the studio recording your new album. What was that like and when can we hear your new work?

It’s pretty interesting how everything has started to take shape after almost a year. I had a lot of parts in my head that I wanted to get to tape. I spent about eight months writing a new story and songs for the EP, then I actually tracked most of it in the studio over a short period of time. Some parts of this EP were recorded here in Colorado by me and my guitarist David Goodheim. The rest of it has been recorded in Ireland, Ohio and other places. Its been a lot of pieces to connect, but its so nice to see it come together. The actual EP will be released in 2018, but I will be releasing a special lo-fi little single and video this October while the EP gets finished.

It’s nice to meet you Kramies. We’re so glad your parents gifted you that guitar as a kid, as opposed to the science kit. We can’t wait for everyone else to catch on to your infectious spirit and music.