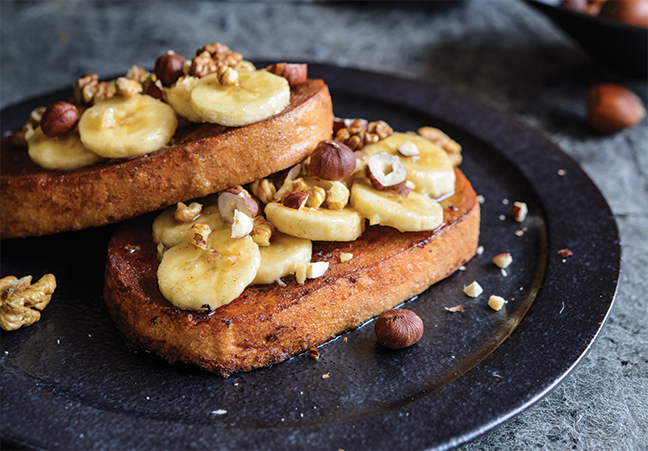 THE BEST FRENCH TOAST IN THE WORLD®

When I got married, so many years ago, I had no idea that my wife was right around the corner from being an amazing cook. As someone who grew up on pizza, mac & cheese and a variety of sugary breakfast cereals like Coco Puffs and Fruity Pebbles, I surprisingly found myself at the fringes of being a foodie. Now that we have three kids, my wife has inspired us all to cook and to appreciate the culinary arts. I have since developed my own specialties that have become family favorites.

Throughout the years, I have taken to heart the idea that putting the time, thought and love into a simple recipe makes “all” of the difference. When I first went on the journey to make The Best French Toast in the World®, I made the mistake of not following this golden rule. I tried to make a variety of extravagant versions of the breakfast. I even developed a warm bourbon flavored maple syrup version with caramelized bananas and pecans. Each incarnation had its pluses and made for an amazing dish, but, after a few sugar overdoses, it always landed on the dessert end of the spectrum. While, I learned a lot about making French Toast along the way, it was the act of going on this journey that led me back a something more simple.

But to take a step back, this all began in the Whole Foods bakery. I asked the woman behind the counter if she could make a recommendation and she showed me a few options. I stared thoughtfully at the breads and in an awkward pause, she looked at me puzzled. I held my breath and then I said, “I don’t think you understand, I’m not just looking for options . . . I am trying to make . . . The Best French Toast in the World®.” She was taken aback for a moment and then smiled at me. At that point, I realized that she understood that I wasn’t messing around. We then engaged in a deep philosophical discussion considering the differences between Brioche and Challah bread. I could tell that she was suddenly and happily outside of her routine. We had both concluded that Challah was the best.

A few weeks later, I was again shopping at Whole Foods, and, as I was checking out, I noticed someone working their way quickly towards me from the bakery. It was my bread philosophy buddy and she remembered my words exactly. She said, “Did you do it? Did you make The Best French Toast in the World®?” I paused, and then, like the end of any classic adventure movie, after the main characters have climbed the impossible mountain, I said, “yea,” nodding my head like I couldn’t believe it myself, “I did it . . . I made The Best French Toast in the World®.”

So here it is in all of its beautiful simplicity.

side of your favorite bacon

1. Prepping the Bread: All breads are inferior to Challah. So don’t mess around with the wrong kind of breads. Brioche is fun for a sweeter more dessert like version, but Challah is the best for its rustic appeal, subtle flavors and perfect texture. Slice the loaf of Challah up into generous 1 – 1 1/2 in thick slices and then put it back into the bag and place it in the freezer for 30-60 minutes before you plan to serve. Some people like to use day-old bread, but I find that you can maintain the freshness and still have the same effect with this trick as it keeps the bread from being overly soaked and ensures that all of the batter gets cooked.

2. Making the batter. In a shallow dish whisk eggs, heavy cream and a more than generous amount of cinnamon. A lot of people make French toast with milk. Sure, that’s fine, if you don’t want it to be the best in the world. We’re not counting calories here, we’re shooting for the moon.

3. Prepping the Griddle: Once your griddle has hit medium-high heat it’s time to throw a little butter on. If it sizzles you’re ready to go. (If it burns too fast it’s too hot. And if it takes too long to burn, it’s not hot enough.) Getting the heat right from the start makes a big difference.

4. Cooking the Toast: Apply a liberal amount of butter on the griddle. If you think it’s too much you did it right. Then take a slice of your pre-cut Challah bread, which should be chilled from being in the freezer and dip both sides of the toast into the batter, letting excess mixture drip off, and place it on the griddle. Remember to re-apply butter to the griddle when you flip. Each side gets its own special butter treatment because you love both sides of the toast equally. Cook it until it is golden brown on both sides. As a side note and with this principle in mind, remember that it is critical that you add more cinnamon to the batter as needed to ensure that every piece gets the cinnamon awesomeness it deserves.

5. Plating: Plating the toast with love is what it’s all about. Plate one or two slices per plate because they’re pretty big. Sift powdered sugar on the toast. Artistically, add fruit and either chopped walnuts or pecans. (My favorite is bananas and walnuts.) Add two slices of peppered bacon (or your favorite bacon) in an X on the side of the plate. This is a part of the recipe and you have to do it.  * Also, note that, if we’re doing the all-out full lumberjack or truck-driver versions, we like to include scrambled eggs with hatch green chili on the side to offer the savory element to the breakfast.

If you pull this off . . . recognizing the importance of bread selection and preparation, the importance of using heavy cream, not milk . . . the importance of being generous with the butter on both sides and consistently adding cinnamon to the batter to ensure that each piece is its best . . . if you plate it like an artist with love and add powdered sugar and the delicious fresh fruit on top, while giving it a little crunch with the pecans or walnuts . . .  then you just might find yourself sitting there with a hot cup of quality coffee . . . saying to yourself . . . oh my God . . . I just did it . . . I just made the Best French Toast in the World®.