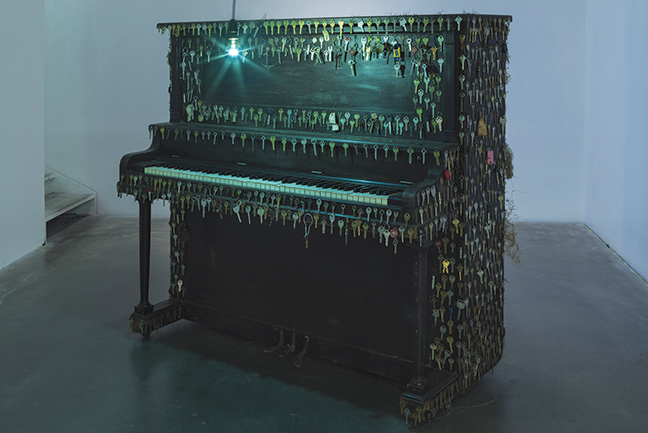 NARI WARD: WE THE PEOPLE

Nari Ward: We the People features a selection of sculptures, paintings, videos, and large-scale installations from throughout Ward’s career, highlighting his status as one of the most important and influential sculptors working today. Since the early 1990s, Ward has produced his works by accumulating staggering amounts of humble materials and repurposing them in consistently surprising ways. His approach evokes a variety of folk traditions and creative acts of recycling from Jamaica, where he was born, as well as the material textures of Harlem, where he has lived and worked for the past twenty-five years. Yet Ward also relies on research into specific histories and sites to uncover connections among geographically and culturally disparate communities and to explore the tension between tradition and transformation. The exhibition includes several key early works, such as the large-scale environment Amazing Grace (1993), which Ward made and exhibited in an abandoned firehouse. In his more recent work, Ward directly addresses complex political and social realities that resonate on a national level, reflecting the profound changes gentrification has brought to his own neighborhood of Harlem and the increasingly fractured state of democracy in the United States more broadly. He uses language, architecture, and a variety of sculptural forms to reflect on racism and power, migration and national identity, and the layers of historical memory that comprise our sense of community and belonging. Nari Ward: We the People will bring together many of Ward’s most iconic sculptures alongside a number of works rarely seen since they were originally created. The exhibition demonstrates Ward’s status as a key bridge between generations of American sculptors and a vital advocate for art’s capacity to address today’s most urgent issues.