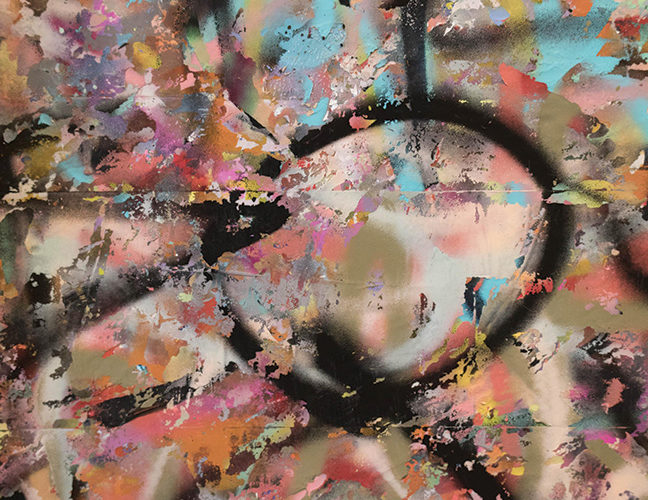 MCA Denver is excited to announce Andrew Jensdotter: Flak, which will open in the museum’s Whole Room Gallery on February 14, 2019. This marks the artist’s first solo museum exhibition. Since completing his MFA at the University of Colorado, Boulder in 2014, Jensdotter has honed a process that synthesizes abstraction and figuration: over a period of months, he paints layers of representational imagery, each layer successively obscuring the others, then meticulously cuts into the built-up surface to create a variegated field of color. It is his singular process that defines these “carved paintings.” In addition to several of these carved works, Flak features a group of new paintings that further Jensdotter’s experimentation with figuration and abstraction and additive and subtractive methods. He makes these new works by building up layers of paint via a repetitive transfer technique, using large sheets of inexpensive plastic and canvas. The results of the new process are jagged, violent, and emotional abstractions that contrast the painstakingly composed, pseudo-organic carved works. Andrew Jensdotter was born in Logan, Utah, in 1976. He holds a BFA from Utah State University, and an MFA from the University of Colorado at Boulder. His work has been exhibited at venues around the US and has been reviewed Frieze, Hyperallergic and Westword. He lives and works in Denver and Vail.