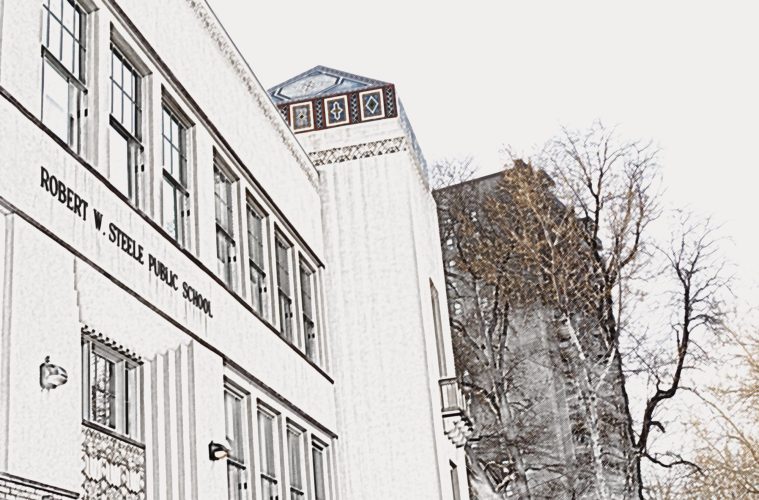 She’s been coming here for years. She saw her older sister stand in this very spot.  She’s watched.  She’s learned.  She’s waited.  Now it’s her turn.  She climbs the launch pad and stands on her toes to reach the first ring.  The cold steel is unforgiving in her hand.  She takes a deep breath, and with a leap of faith, she launches her first attempt – first of many attempts – to swing around the circle of eight gymnastics rings known in elegant simplicity as “The Ringers” on the east playground at Wash Park’s own Steele Elementary School.

Denver Public Schools spent a lot of money upgrading the playground about a decade ago.  The old and dangerous steel equipment was replaced by molded plastic and foam rubber padding.  They left the ringers alone, though.  And now, to this kindergartener, they are as old as time.  Learning the ringers is a coming of age of sorts.  It’s one of life’s first challenges and a naïve, soft-handed five-year-old’s first chance to be judged by her peers – face ridicule and shame – as she learns from her failures.  She knows she can make it all the way around.  She has seen the others do it and she has the determination and blind optimism we hope for every child to have. 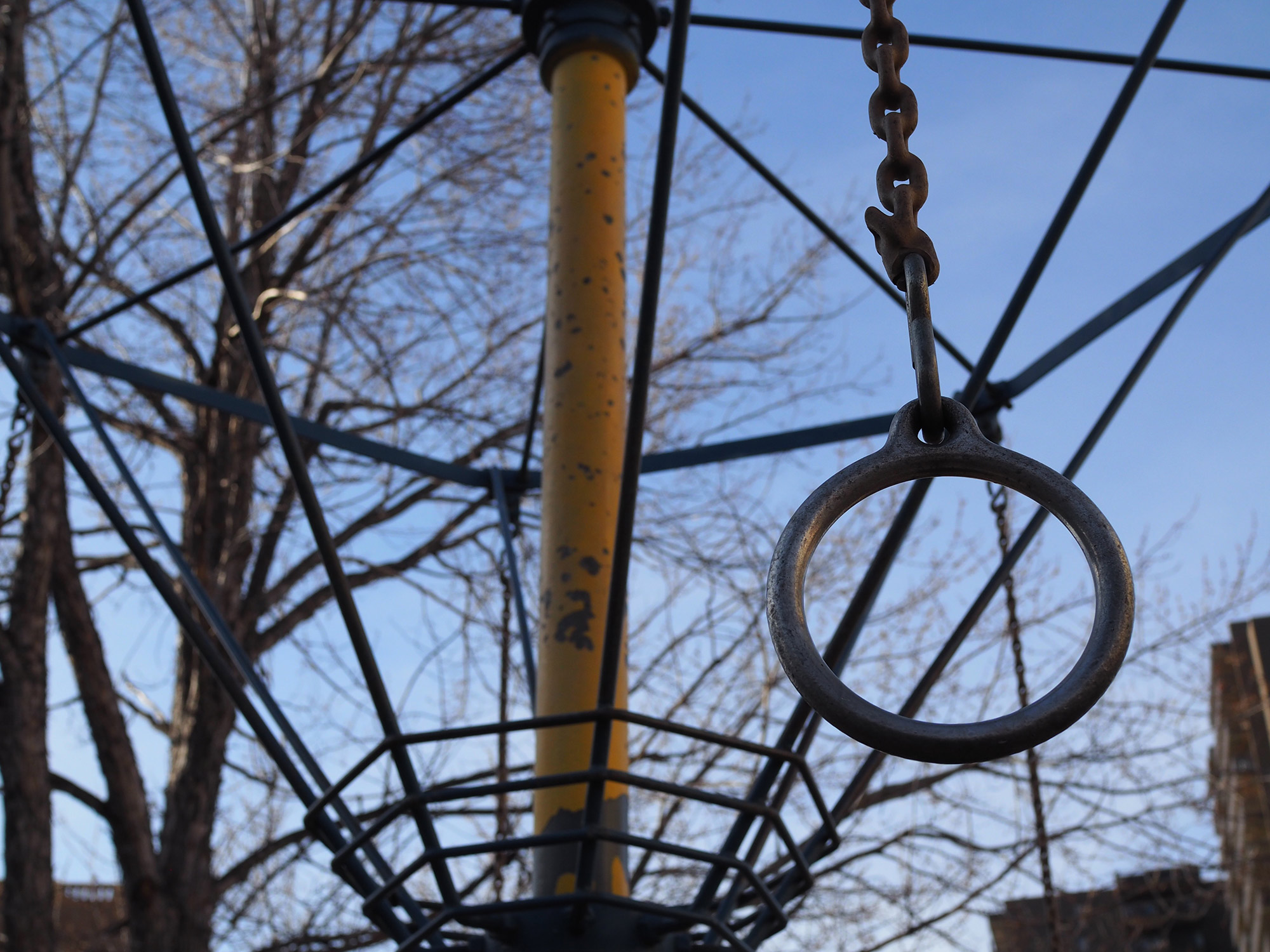 The fact is that most of the students enrolled at Steele Elementary have not had to face many early life challenges as they reach school age.  In his fifth year as principal (including one transition year with the previous principal), Kevin Greeley reports that 75% of Steele’s 467 enrolled students come from the neighborhoods surrounding the school.  Most have been blessed not to face real hunger or lack of warm clothes.  Most of them have a cozy safe home and an abundance of nurturing love in their formative years.  The challenge of the ringers might sound trite compared to the struggles for food and basic necessities faced by so many children across Denver and around the globe.  Trite?  Maybe.  But learning to face challenges is as basic and fundamental as the three R’s.  Kevin Greeley thinks so.  That’s why he and the 45 teachers and staff at Steele strive to develop well rounded, successful, happy little humans.

Academics play an important role in this development, but so do cooperation, social achievement and forgiveness.  That’s why Kevin spends many of his lunch periods eating around a conference table in his office with kids that are struggling to see eye to eye.  Sometimes they discuss the specific conflict.  Sometimes they talk about the Broncos or the new Star Wars movie.  It doesn’t really matter.  The kids always leave their lunch meeting knowing they are valued in Mr. Greeley’s eyes.  Sometimes that’s all it takes to make the conflict subside.

With peacemaking efforts making promising advancements, Kevin turns his attention to academic achievement.  I’ve never met a person who admits to being a fan of standardized tests, and Kevin is no exception.  Still, the tests exist and Kevin, along with an eager and capable group of teachers, is charged with the task of maximizing the performance of the Steele students.  Steele is in the green category based on the most recent results on the new state tests.  Green is good on a scale that starts with red at the bottom and continues through orange to yellow to green and has blue schools at the top.  Good – but not good enough for Mr. Greeley.  “We received about 72% of the available points.  It takes at least 80% to get into the blue category,” Kevin reports.  Then he pauses.  “We received 71.96% to be exact.”  This number clearly gnaws at him.  There is room for improvement, and Kevin knows exactly how much.  It is more than his job.  It is his passion.

Kevin explains that the key to moving Steele into the blue category lies in what he calls the “opportunity gap.”  Let’s face it.  Most Steele students come from white middle or upper income class families.  However, Steele is also the educational home to minority families and kids facing economic challenges.  When you spend time making extra efforts meeting basic fundamental needs or you come from a different background or culture, learning in general and standardized testing specifically presents some serious challenges. Kevin views it as his mission, and that of the entire Steele community of teachers, staff and parents, to bridge this opportunity gap and make sure all Steele students learn, grow and thrive.  Moving from green to blue is not the goal.  It will be an unavoidable consequence of 467 successful young people.

Blue is likely to happen.  Kevin Greeley has faith that the Steele community can conquer most any goal.  Current and past fundraising performance paints a picture of remarkable success.  Prior to steering the ship at Steele, Kevin was a principal in Commerce City.  He remembers taking great pride in a year when his PTA raised over $9,000.  Last year the Steele PTA raised $215,000.  Mr. Greeley says it is both humbling and amazing to be a part of a fundraising machine with the dedicated team members that make this happen.  The Steele community eagerly donates about 10% of these funds raised to other DPS programs where financial needs are great.  In a recent Steele community email, Kevin concludes, “If we want to solve the world’s problems we would put the Steele PTA in charge of everything (our PTA is about 95% women).”

Kevin’s global solution advice was part of his recent promotion of International Women’s Day.  Kevin admits that taking positions on social issues is a slippery slope and difficult to do as an educator.  He explains that he came out in support of this campaign for two reasons.  First, some of the Steele teachers felt strongly enough about this cause to recommend it to Kevin for school-wide exploration.  Their support for a cause about which Kevin believes in passionately emboldened him to speak out.  Second, it is not really a controversial issue, and it is one K-5 students need to understand.  Equal opportunity, equal pay and equal treatment of women receives overwhelming public support and deserves a place in the curriculum of an institution that strives to develop academically and socially successful and well rounded happy little kiddos.

The goal is success through a well rounded approach.  It really does take a village – or in this case, the Steele community – to raise a child.  Academic opportunity gaps must be bridged.  Squabbling third grade conflicts must be resolved.  There is money to be raised to meet the financial needs of the school with more than a little leftover to share with others in need in the district.  Social issues must be addressed, understood and supported.  And the ringers – the daunting nemesis of each new class of kindergarteners – must be mastered.

The fourth and fifth graders rule the field just south of the playground.  They’re too busy playing football to remember when the ringers mattered.  The second and third graders are occupied with scurrying over molded plastic and jumping off of slides onto foam rubber padding in massive games of “tag.”  They’re practically grown-ups now, after all, and the ringers are for kids.  But to her, the ringers are the center of the recess universe.  She might not know it, but one of the early lessons that will arm her with the ability to face challenges later in life swings six feet above matted wood chips in the far northeast corner of the playground.  She might not know it, but this is an important step in her development.  Not a bad way to start school age life.  Trying, failing, trying again and eventually taming the ringers is exactly what it means to be growing-up Steele.