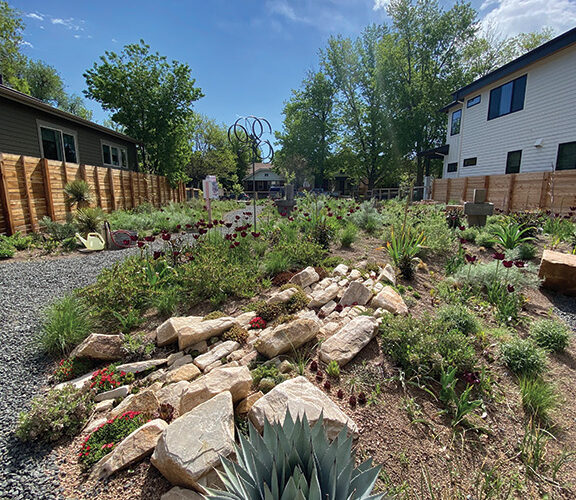 “With closed eyes, the garden is, in time, felt, touched, tasted, heard, and, through the most evocative of the five senses, smelt, and indeed, the garden may be inhabited by lingering invisible presences, and even be mysteriously perceived in ultra sensory ways. In the garden, art does not imitate nature, but she joins with nature, becoming one with her.”

– Charles Davis, 2008 Introduction to Of Gardens by Francis Bacon

When Lisa’s next-door neighbor passed away, she was worried that his property would become yet another site for an oversized, stark white scrape that would swallow up the nurturing light bathing her elegant Wash Park bungalow and its surrounding vegetation. Out of what Lisa calls “pure selfishness,” she purchased the lot, demolished the deteriorating structure, and with the expert advice of horticulturists and her fellow volunteers at the Denver Botanic Gardens, a plan took shape to develop a sustainable, naturalistic garden full of plants endemic to Colorado. At first, she considered simply extending her own personal exterior plantscape, perhaps even by incorporating the front wall of the old bungalow, but after conversations with Botanic Garden folks, decided on a separate, self-sustaining pocket garden, symbiotic with the Denver Botanic Garden’s own Steppe Garden which was installed in 2016.

“We did not amend the soil, we just tilled it, mainly because I wanted to prove how easy it is to grow these plants. Also, growing a landscape the way I am leads to such a thick carpet that weeds really don’t have a chance,” Lisa explains. “I put in water as kind of a precious resource. It is contained in a circulation system. This year I will probably only need to water when it is hot ––maybe once every two weeks. Anyone can implement this kind of planting into their landscape. We made sure to focus on plants that can be easily found in garden centers.”

Regarding the design of SummerHome, she elaborates, “We have about forty-five species of plants here that repeat throughout the garden. Repetition is a fundamental design principal. You’ll see this with the wind and water sculptures ––I prefer groups of threes and fives.” Lisa is passionate about succulents, and points out how the hens and chicks form a perfect Fibonacci sequence, a mathematical pattern commonly found in nature in which each number in a sequence is the sum of the two numbers that precede it. The website Live Science attributes the origin of this concept to ancient Sanskrit, and for my mathematically challenged mind, picturing an Indian mandala design ~ circular like the succulents ~ helped me to understand what she meant. “Ideally succulents should be tight. They tend to spread open when they are overwatered,” she adds. “Our garden also contains about 650 cacti representing approximately twenty species. I get my cacti from a company called Cold Hardy Cactus, where they sell endemic specimens bred using cultivars from the wild.”  Four impressive blue agaves, which can survive cold temperatures when large, hold court. They were salvaged from an assisted living community that was revamping their landscape.

In addition to plants, discarded sandstone from a quarry in Lyons, Colorado punctuates the cactus and succulent areas of the garden. Gravel paths crunch underfoot as you meander through, further engaging the senses. As of this writing, gorgeous midnight purple Black Parrot tulips dot the pale, sage green, spring-time background and steal the show. In June, gracious allium and swishy foxtail will make a joint appearance. These plant players make the most of their small stage, all year long. “Just because it’s xeric, doesn’t meant it’s not beautiful. At SummerHome you will see a rolling bloom throughout the growing season and, in the cold months, there is ‘winterest’ when the seedheads and branches are exposed.”

“With land ownership there is a tendency toward entitlement, and I want to avoid that. I want this garden to be for everyone,” Lisa assures us. “Especially given all of the activity and labor going on in this neighborhood, people need a place to sit and breathe with Mother Nature.” She envisions her garden sometimes serving as a small event venue for weddings, dance performances and group tours ~ the latter two which have already been booked.

Give Lisa a shout if you would like to volunteer in the garden: info@summerhomegarden.com. Regular volunteer hours occur on Friday mornings from 7:00-9:00. Learn about bare root planting, plant division, bulb planting and garden design, and, last but not least, what plants Japanese Beetles ignore. Her website features stunning photos and even more details about SummerHome: https://summerhomegarden.com.