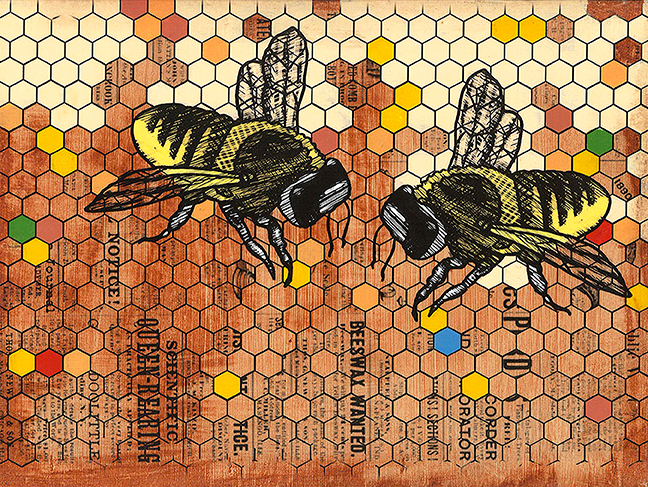 Bees have fuzzy legs; it’s one of the things that distinguishes them from wasps and flies. That is where the similarities end. From enormous fat bumblebees, so heavy the whole plant bends over when they land on it, to bees no bigger than the nib of a ballpoint pen, shiny and green, bee looks run the gamut. Some sting, some don’t; some live solitary lives nested inside a hole in a stick, some live in a bustling hive as an indispensable cog in a machine. But it’s their fuzzy legs that makes them so important to us humans and our highly specialized crops. See, each time a bee lands on a flower for a sip of nectar, pollen sticks to its legs. Inadvertently, some of that pollen stays behind on the next flower, leading to the development of fruit – apple, kiwi, peach, eggplant, cocoa, coffee bean, and hundreds more. Those little fuzzy legs are responsible for producing 2 out of every 3 foods that we eat. Without bees, life would not only be bland but there would be a lot less of it. This makes them a keystone species meaning that they are essential to the health of our entire ecosystem.

Bees navigate better than Magellan. Using landmarks, wind patterns, and sun position, they know where they are, where they’ve been, and where they are going. When a scout honeybee finds a food source, it flies to the hive, regurgitates free samples of collected nectar for other worker bees and then dances. The round, sickle, or waggle dances are context dependent and show hivemates the distance, direction from the hive according to the sun’s current azimuth, and the quality of the nectar source. It’s like yelp – 4 star wildflower meadow, at 11 o’clock in 200 meters. Several scouts with nectar sources will have a dance contest, the winner taking all worker bees out to lunch.

Thanks to their enormous economic benefits, research such as understanding homing mechanisms and waggle dances is well-funded. Recent research, however focuses on just what the hell is happening to bee colonies across North America. The research reads like a game of Clue. Tolerable thresholds for annual hive loss ranges between 15 and 20%. In 2015-2016, 44.1% of surveyed bee colonies died.  The causes are likely a combination of biological, cultural, and chemical factors.

Varroa and tracheal mites are the number one pest in honeybee hives. They were long a problem in Europe but the U.S. took protective measures against their introduction here in 1922, introducing the Honey Bee Restriction Act. By 1980, they had arrived anyway and US beekeepers suffered losses of 50-80% of their hives. Varroa mites still wreak havoc on colonies as the presence of numbers as low as 3-4/100 bees can devastate a colony. There are other biological threats but these are thought to be insignificant. Commercial beekeepers routinely treat for mites, keeping incidences of colony loss low. However, home beekeepers are not as consistent, educated, or aware of the problem and there have been reports of commercial hives being decimated by mites due to neighboring hobbyists with untreated hives.

Bees may also simply be stressed out, which can weaken a hive, leaving is susceptible to disease. Thousands of hives are trucked to California annually to pollinate the almond orchards. Hives are split and relocated across town and across the country to supply demand from commercial and hobbyists alike. Hives are being split up to four times a year, twice their historic rates, to keep up with hive loss which is stressful on the beekeepers as well as the bees. Poor forage is another leading stressor for bees. Lawns do not feed bees. Neither do streets, buildings, rocks, or mulch. In fact, while we are at it, neither do vast swaths of wheat or corn. Sod is the number one agricultural crop in the US. Meaning it’s not just in your lawn but grown for transport for new lawns, parks, and golf courses nationwide in large agricultural fields across the country. Like sod, corn and wheat are also grasses, all of which are wind-pollinated crops meaning they do not produce nectar. No nectar, no bees. Add a changing climate to habitat destruction and you have a deadly combination. This year, the bees have been flying since January, long before any available nectar sources were blooming. Without ample stores of honey or supplemental feed, a colony can starve. Bees begin collecting pollen with warmer temperatures and are able to collect it from overwintering sources such as pine trees. The protein in pollen triggers reproduction, making more hungry bees swarming in a food desert.

The third ingredient in this recipe for stress are pesticides and herbicides. Just the mention is contentious because their use is so prevalent and provides such value to large growers. However, pesticides target insects and bees are insects. It bears mentioning that many herbicides have the dual effect of eliminating nectar and pollen sources while also being extremely toxic to bees. We may not know the extent, but it is definitely problematic and, because of this, the importance of following the instructions on the label cannot be underscored enough. Wind and water carry these chemicals away from their intended targets creating more undesired effects. The mysterious colony collapse disorder may well be a case in point.

Colony collapse disorder, CCD, is that feeling you get when you come home and the lights are on, the table is set, the plates are half empty and no one is there. Beekeepers find well-stocked hives with stores of honey and pollen, a healthy queen, and a few nurse bees…and nothing else. Typical hives have 30,000+ bees in them at any given time. With CCD, they are not only missing but there is no evidence of their whereabouts. Diseased hives will have piles of the dead astrew on the ground but not so with CCD – it’s like the honeybee rapture. Scientists still do not understand CCD but one working theory is pretty compelling and has led to reform of regulations surrounding large-scale, agricultural pesticide applications. Airborne pesticides adhere to dust. When blown on the wind, this dust sticks to the hairy pollen sacs on bees’ legs. A known result of certain classes of pesticides is the disorienting effect they have on bees. Thus, when bees fly out of the hive to go about their daily business of collecting pollen and nectar, get hit by a pesticide-laced dust storm, they can become disoriented and lose their way home. You may have experienced this sensation yourself during a late night bar crawl but, luckily, you made it home and, when you got lost, you weren’t bringing home food for the whole family (hopefully).

Fortunately the incidences of CCD have gone down in recent years, running in contrast to overall hive loss. The factors are many and likely interconnected so there will not be one culprit in this game of apiary clue. There are many small choices homeowners can make to be bee friendly. Planting a diversity of flowering plants that bloom over a long time span, eliminating lawn where unused, and limiting chemical applications can make a real change.

City dwellers can make an enormous impact on bee health by making simple budget friendly backyard changes. We can transform our cities into pollinator habitat by considering a few basic bee-needs: food, water, and a place to rear their young. Plant flowers! Choose a variety of flowers in different sizes and colors with bloom times that range from March-October. Bees travel long distances for food but home is where the water is – a bucket, birdbath, fountain, or pond all work as far as the bee is concerned. Finally, a home. Honeybees need a hive for them to be functional in the city. Though an incredibly cool hobby, beekeeping comes with time and financial commitments. Do it if you are really into it but if you are not then building or creating homes for native bees is easy, beautiful, and low maintenance. They will nest in any small cavity so a bundle of sticks or tubes with a range of hole sizes will house a number of species, most of which are solitary and stingless. Finally, support research and encourage wonder, observation, and curiosity. Coloradobeekeepers.org has a great list of ways to give and learn.

(Artwork by: Brent Rodgers and Derek Cadena of Two Little Fruits at www.twolittlefruits.com)