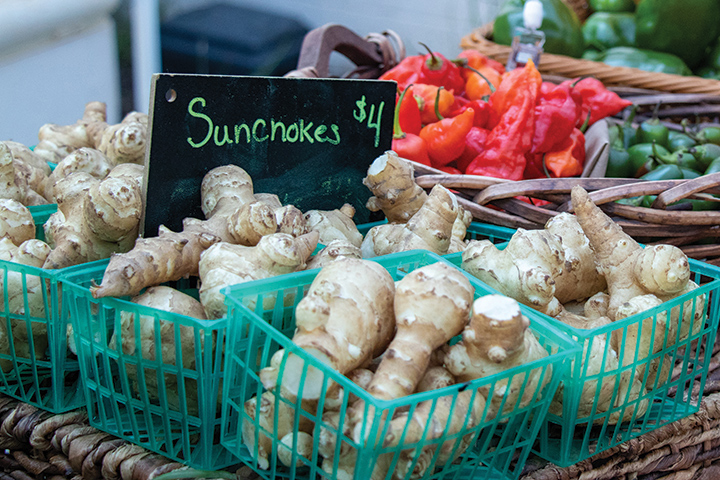 SUNCHOKE ON IT: A SPRING RECIPE – FOR DISASTER

I never imagined that my local debut as a writer would involve me telling a story about how I essentially gave myself food poisoning with an unassuming tuber. But here we are.

So if you are here for a delightful spring recipe that you can serve to your guests as you all come back together on your patio after a year of quarantine, you may be a bit disappointed.

You will, however, learn a thing or two about plants, cooking, and culinary risk taking.

This all began a couple weeks ago, when I found myself eyeing a bag of Jerusalem Artichokes (also known as sunchokes) in the produce section at the store.

Thought 1 – why are there so few of these in this bag?

And so they came home with me.

The next morning I found a simple recipe for smashed, roasted, sunchokes with thyme and butter. I parboiled them, smashed them on an oiled baking sheet, tossed them with olive oil, kosher salt, black pepper and fresh thyme. As they roasted in the oven, I browned some butter and soft boiled a couple eggs. I served the sunchokes with an egg on top and a bit of avocado on the side, then drizzled the whole thing with browned butter. They were good – the texture was kind of like a mix between a potato and a water chestnut. Another grocery store gamble went down in my books as a success! (Yes, this is apparently what I call fun these days – what can I say, I’m a party animal.) My kids wanted none of it, but there wasn’t much to be had anyhow. I was in back to back video calls for work all morning, and before I knew it, I had eaten the entire bowl myself.

All was well for a couple hours until I started to feel a bit off, like maybe I had eaten too much? Or maybe the breakfast was just a bit rich and wasn’t agreeing with me? Hmmmm.

Another hour goes by and it’s become very clear that well…let’s just say, things weren’t going to work out between me and my breakfast, and we would regrettably be forced to part ways, and it wouldn’t be pretty.

It then occurs to me to do an online search for “gastrointestinal issues caused by sunchokes” and WOW did I find a whole corner of the internet that I immediately wished I had been familiar with 24 hours earlier. How did I get to be in my 40s, a pretty accomplished cook and foodie to boot . . . and NOT know that these things can cause major “tummy issues” for people!? Here are a few of the article titles that I found:

“Why You Might Want to Take it Slow With Sunchokes”

“Sunchokes, the Most Painful Vegetable”

“My First and Last Sunchoke”

And my personal favorite, the very subtle:

The Tea on Sunchokes

Jerusalem Artichokes are not artichokes at all, but rather, the tuber/root of a sunflower, Helianthus tuberosus. Sunchokes also contain around 70% of a carbohydrate called inulin. Inulin is good, in that it feeds your gut “good” bacteria, kind of like a probiotic. This also makes sunchokes low in calories and a good low carb, high fiber substitute for other starches. The less desirable side effects of this bacteria feeding and fabulous fiber is that it causes what my grandmother would call “wind” and I will spare you the rest of the details but I’m sure you get the point.

It is important to note that this unpleasant effect varies from person to person, and not all sunchokes contain the same amount of inulin; this varies greatly based on the location and temperatures where they are grown. #themoreyouknow.

Science is cool. Plants are cool. Cooking is cool. Experiencing an unplanned “cleanse” after eating a cute little vegetable with no warning whatsoever is decidedly not cool. I feel like Martha Stewart, Ina Garten, any number of cookbooks I own, or the label on the bag of sunchokes themselves could have taken a few minutes to give me a heads up on this. I guess you could say that sunchokes have a PR problem 🙂

When prepared well, and eaten in smaller amounts than oh I don’t know, an entire BAG, I still assume that this root veggie is still a delightful risk to take. I just wanted to make sure that from here on out, the rest of you fearless food adventurers can be more informed when you decide to do so. As for me, my grocery store gambles will be happening solely in the ice cream section, at least for a little while.